Since the death of Queen Elizabeth II, on Thursday 8 September, people around the country have recalled their meetings with the Queen.  BUC News speaks to Pastor Richard Jackson, former President of the North England Conference and current church pastor of the Derby Bethel, Chester Green and Burton-on-Trent churches, and Judy Clements OBE, South England Conference Children's Ministries Director and Safeguarding Lead, recall their recollections of meeting her. 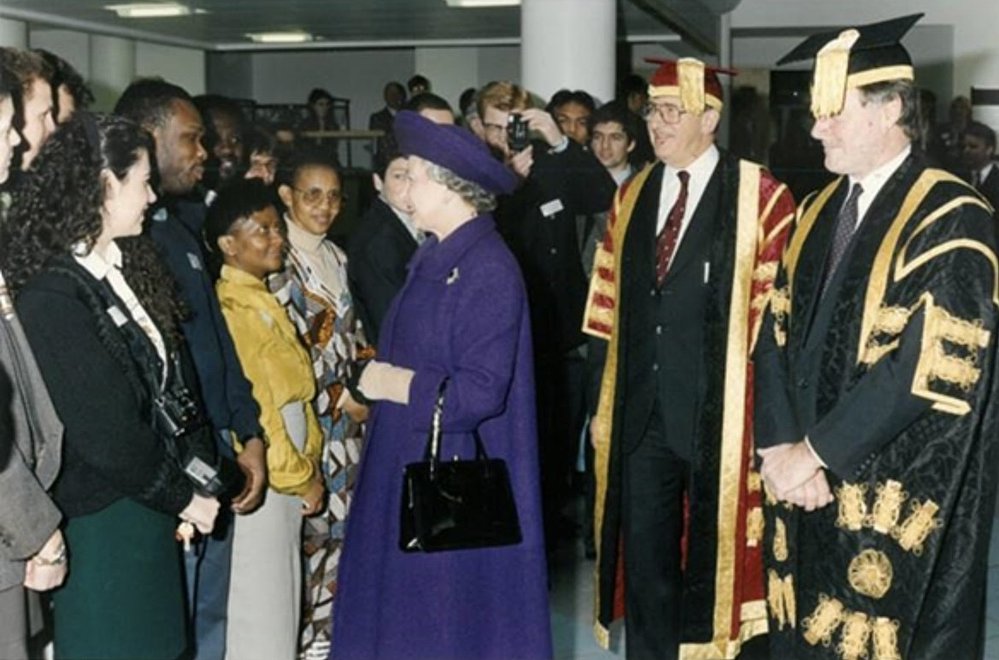 The Atrium at the Sheffield Hallam University City Campus was officially opened by HRM the Queen in March 1994. The University asked several of us as international students to line the path of the Atrium. I was the only Jamaican International student there at the time of her visit. She passed each student and asked their name and the country they were from, but for me it was more than that. She asked me several questions as we spoke together. The conversation as I remember was as follows:

Queen: What is your name?

Queen: Where are you from?

Queen: Smiling and looking excited she said, I've just come from Jamaica on a visit.

Queen: What are you studying?

Queen: What are you going to do with that degree?

Richard: I’m going back to Jamaica to help in the development of my country.

Queen: Work hard and be good.

After the conversation with the Queen, the media had interviews with me asking what the Queen had said to me and why she was with me so long. I was on television and in the various newspapers. I was really excited meeting her. She made me feel relaxed and she was very genuine in the way she spoke with me.

As I reflect on the moment, my life has changed and though I did not go back to live in Jamaica, the irony is that I am developing her country – the UK.

I must say meeting the Queen was amazing but meeting my Jesus face to face will be a joy that will be immeasurable.

I first met the Queen in 1999 when she came to do the official opening of the newly refurbished Birmingham Children's Hospital. which she granted us permission to rename the Diana Princess of Wales Children's Hospital NHS Trust. I was Chair of the Trust when we wrote to the Queen.  When she wrote back agreeing to the name change, we were delighted!

We invited her to open it and we felt so honoured and privileged when she said yes. I recall that we had several nurses who had worked tirelessly throughout the Second World War, now retired, yet they came to enjoy the day with us. I accompanied her on the first part of the tour of the Trust  and I remember asking her and Prince Philip to sign our visitors' book. She was very gentle in spirit and showed great compassion for our sick children. For me, it was a great personal honour at the time, and more so some months later when I moved to London to begin a new career as a senior civil servant in the Home Office as Adviser to Her Majesty's Prison Service on Race and Diversity.

One morning my PA came rushing into my office waving a piece of paper in excitement telling me how "proud" she was of me. I thought it a very odd word to use when we had barely been working together for six weeks.

She approached my desk waving the paper in her hand and said, "Judy, look, the Prime Minister (Tony Blair at the time) wants to put your name forward to the Queen for an OBE!"

I clearly recall after hearing what Elaine said, laughing without fully engaging with her and replying, "Oh no, that will be Judy Clements, the CEO of MIND," who shared my name. But Elaine repeated what she said before in a louder voice to try and capture my attention. This time I did not even look up at her as I repeated what I said to her before, and added, "they have got the wrong Judy Clements!" Elaine came and stood beside me at my desk and gave me the letter to read which I did.  It said words to the effect, "I am minded to put your name forward to Her Majesty the Queen to receive the Officer of the British Empire award in the 2000 New Year's Honours.  This is in recognition for your Services to the community in the West Midlands. Will you accept?"

The letter was addressed from the Prime Minister and came from Number 10 Downing Street, to a confidential fax located in my PA's office.

I cannot begin to describe my feelings at the time, I think I muttered something to Elaine after I read the letter, like, "it is me." I was in serious shock, my body went numb, I couldn't focus on my work. I remember asking Elaine to leave me alone for a while to digest this news and proceeded to read the letter, only the good Lord knows how many times; before sitting back in my chair almost lifeless as I could feel the tears flowing as I kept saying, "Thank you Lord." My God knows what that big sigh of thank yous are for; because He had navigated me through some choppy waters in both my professional and personal life some months prior but gave me the courage to stand firm and make the right decisions in all those circumstances as He took care of me spiritually, emotionally, and mentally as only the love of our Father God can.

So, I had the pleasure of going to Buckingham Palace some months later for my Investiture where I received my OBE from none other than Her Majesty Queen Elizabeth II herself. As she pinned the medal on the lapel of my jacket she said: "it gives me great pleasure to give you this." I replied, "thank you Ma'am, we were so delighted when you came to Birmingham to open the Children's Hospital last year." To which Her Majesty replied, "yes, indeed, I remember." At which point I knew that my time was up as the signal we had all been briefed to be aware of when time with Her Majesty has concluded had just been invoked; I managed to curtsy and rise without toppling over. Once more I found Her Majesty to be very kind and compassionate and appreciative of the work I have done in the Midlands.

I have also been blessed to have had the pleasure of staying on the Windsor Estate a couple of times for work purposes, and recall one weekend when we were staying in Cumberland House, we were told that the Queen was in residence and will be attending church. Now it's quite ironic that this conference weekend we were discussing the issue of Policing and Islamophobia. The delegation was made up of senior police officers from across the country and prominent individuals from the Muslim community.

As I recall every member of our delegation (about 25 strong) attended church the service. After which, the Queen came to meet and shake the hand of every individual. We were all delighted to meet her. Her radiance and interest in meeting us, together with her sheer warmth, shone through.

The last time I met the Queen was about eight years ago. I had spent about five years as Deputy Chair of Barnardo's, one of this country's largest children's charity. We built a new state-of-the-art headquarters in Barkingside, and we were thrilled when the Queen came to do the official opening. She was accompanied by Camilla, now Queen Consort.

Once more I feel truly blessed to have had these opportunities to have personally met and dialogue with our late Queen, Queen Elizabeth II. Let us continue to pray for the new King and the rest of our Royal family.

Training for Mission and Conference Presidents