Two special anniversaries coincided with this year's Annual Toy Service at Stanborough Park church in Watford. Not only has this annual Christmas event been providing toys for needy local children for 60 consecutive years, but its current organiser celebrated her 25th anniversary. So both diamond and silver jubilees were recognised at this year's service held at the church on Sabbath, 11 December.

Since the event was first started back in 1961 by the kind-hearted former member, the late Alf Kelly, who received the MBE for his services to the people of Watford, the church family and their friends have been donating new toys each Christmas. The toys are given to needy local families unable to provide the sort of Christmas they wish for their children. Every year since then, hundreds of new toys have been spread out on the platform and around the church; a Christmas tree with twinkling lights and festive decorations along with melodies add to the atmosphere. There are also musical contributions from the younger members of the congregation. During the service, the children are invited to bring other toys to the front of the church, placing them in sacks held by the Pathfinders. 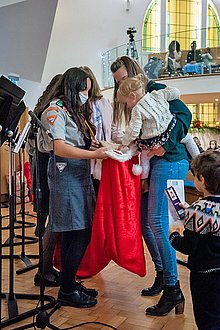 Alf Kelly died in 1996, his daughter, Pat Walton, took over the role of organising the annual event in his memory, ensuring its continued role in helping the local community. She was the one who first told him about a similar community outreach project at the Ealing church back in 1961. Each year she reminds those present of the event's origins and reminds us of the continuing need for its service to the local community and its value to recipients.

Representatives from Watford Borough Council, social services and local charities attend and often participate in the Christmas-themed service. Usually, the Mayor or Chairman of the Council makes a speech accepting the toys. Current elected Mayor Peter Taylor makes sure that he attends, and this year his predecessor, Baroness Thornhill, also formed part of the platform party. Watford's MP, Dean Russell, was forced to withdraw at the last moment. 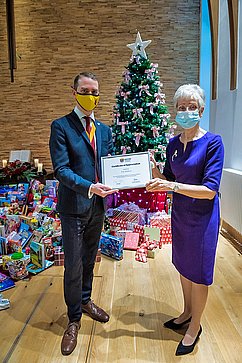 Audrey Balderstone organised the actual display and order of service. Her floral arrangement skills are well known and have resulted in many medals, including from the prestigious Chelsea Flower Show. Both Pat and Audrey felt that the service and display were the best this year. Commenting afterwards, Audrey said, "I was thrilled with the service today and felt it was one of the best we have had – even with the lack of people and crowds of children. There were more children than I thought there might be.  We have had some very positive comments from different parts of the world. I was thrilled that Pat was acknowledged – especially as it was her 25th anniversary."

"The giving of gifts has always been part of the Christian life, especially to the children," Pat said, addressing the congregation.  Continuing, "Toys are such a wonderful inspiration to children. They can bring them joy and happiness and help them learn to play together and open them to unlimited possibilities. There is nothing as sad as a child without a toy. That is something we all want to respond to by making sure that many children can have a toy at least at Christmas."

In accepting the toys, elected Mayor of Watford Peter Taylor said that he was glad to join the congregation for the 60th anniversary thanking members for the toys and "a huge thank you for all that you do and the impact that you have made over the decades… A huge thank you for all that you do throughout the year." (The church runs a welfare department heavily used by social workers – also organised by Pat Walton – and has acted as a food bank and vaccination centre in recent times.) He continued that he recognised it as a church that "loves God and loves your neighbour and you recognise that everyone in the town is special and has value and dignity and the gifts speak about the values that you have."

He presented Pat Walton with an 'Unsung Heroes of Watford Award' after his acceptance speech.  He commented that she well deserves it, given the contribution she has made to the town through the Toy Service – it was her 25th year as the organiser, her welfare service and food bank.

After the event, he commented, "It was, as ever, a really special service, and I was pleased to be able to be part of it. Pat, Audrey (Audrey Balderstone, who oversees arranging the display and the programme) and everyone involved in the Welfare Department do such important work."

Baroness Thornhill, for her part, remarked how pleased she was to be invited back for the event and that the occasion has lost none of its sparkle for her and was still the event that started her Christmas season.

The service is a special event in the church calendar. The building has always been packed with worshippers. Last year, it went ahead with no congregation because of lockdown rules. This year the gathering was limited to 200 socially-distanced people within the sanctuary, with an overflow of 65 in an adjacent hall who watched on a large screen. There have been over 300 viewings via the internet. The Christmas message this year was given by Pastor Wayne Erasmus, who gave a different perspective on the traditional Christmas story. 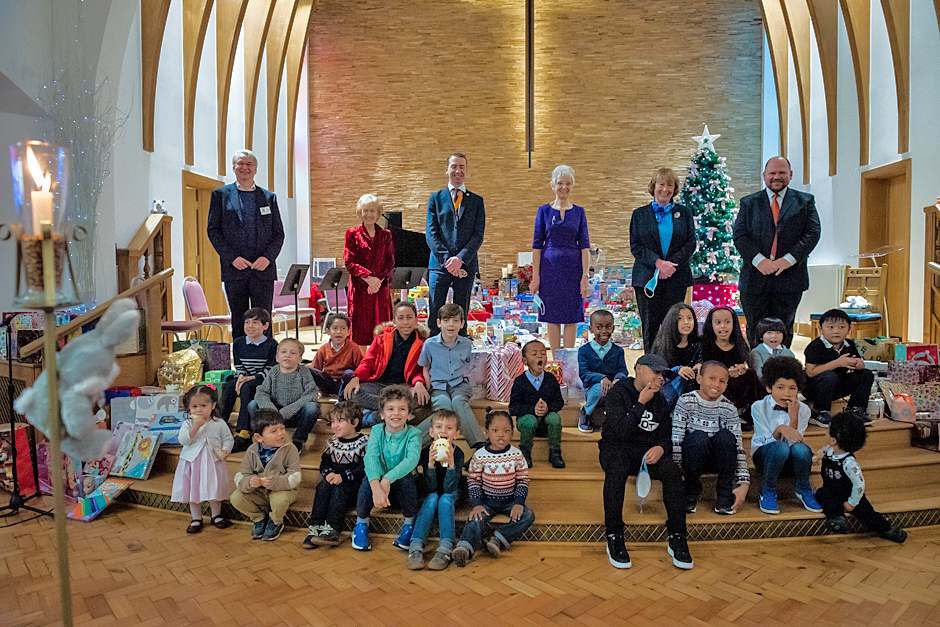 In the early days, Alf Kelly would deliver the presents himself, often dressed as Father Christmas, and it was the Watford Observer that first dubbed him 'Watford's Father Christmas'. He knew where the hardship cases were from his various roles within the community.

However, Child Protection laws today mean that this direct contact is no longer possible. Hence, organisations, charities and social workers now collect and distribute the toys to those on their caseloads. This year's recipients will include the Watford and Three Rivers Refugee Association (as usual), MIND and the Westfield Children's Centre. Tim Whittaker, the Chair of the Trustees of the Watford and Three Rivers Refugee Partnership, was in attendance. He insisted on addressing the congregation, expressing his thanks to them for donating the toys as they would form part of the hampers they were preparing for the 79 families with children currently on their books.

The generosity of the church members over the years is much appreciated locally, and there are anecdotal stories of members coming across adults who have commented that as children, the only toys they received at Christmas were from the church. This was all because a teenage girl told her father of an innovative event at a west London church, and he decided to introduce it to Stanborough Park!

However, whilst being the longest-running Toy Service, it was certainly not the first. A search through the Messenger archives reveals that the first Toy Service was held at Wood Green church in 1956, and in the early 1960s, there were also events at Watford Town, Ealing and Oxford. The migration of workers at The Stanborough Press in 1966 led to the annual event being established there, where it also flourishes to this day.

The photos show some of the children who donated toys during the service.