On Sabbath 18 September, for the first time since the lockdown, members from within the Welsh Mission territory were able to come together for a Day of Fellowship. Held at the Holiday Inn hotel conference suite in Newport, approximately 200 people assembled wearing their masks and in their 'family bubbles', to enjoy a day that brought spiritual enrichment, fellowship, joy and tears. 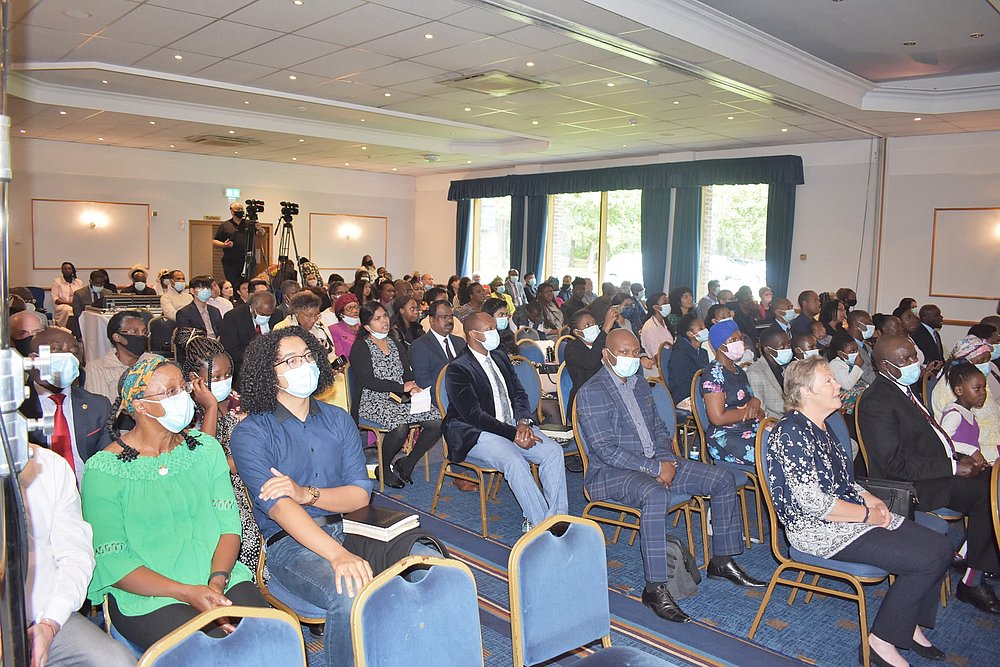 Pastor Emanuel Bran, outgoing Welsh Mission President (newly elected North England Conference Executive Secretary) gave his last appearance in this role. As host for the day he welcomed everyone to this special day that brought people from all over the Mission.

Veering from the usual Sabbath morning service schedule, attendees were provided with three mission spotlight videos of activities, testimonies and outreach projects conducted by lay members. These videos highlighted the effective work being done by members during the pandemic even with its limitations and restrictions. 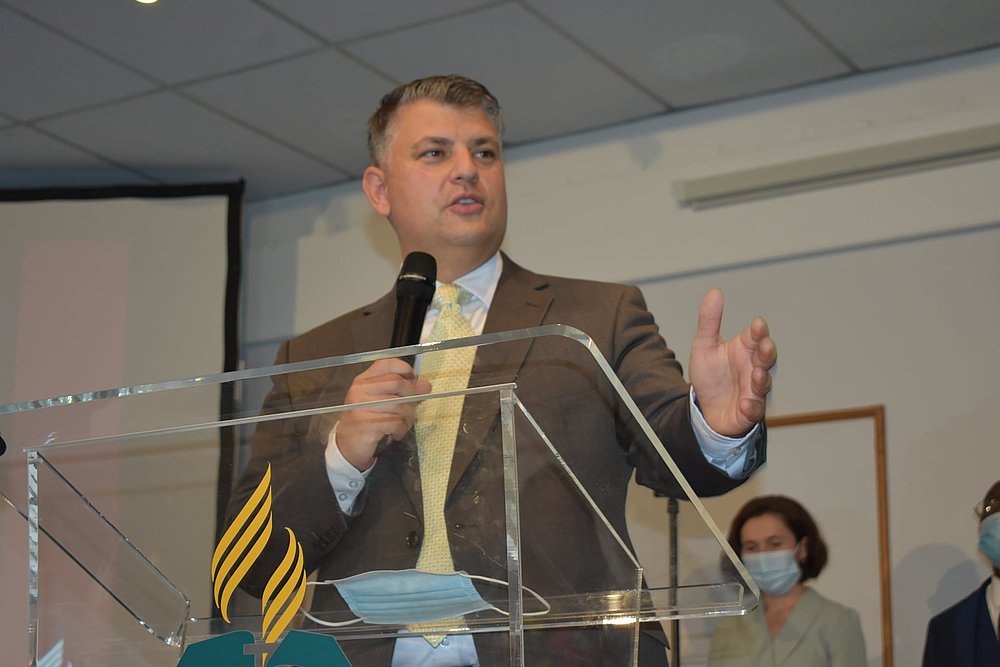 With Pastor Bran's last official meeting with church members there was an opportunity to bid farewell to him and his wife Camelia for their five years of service. Pastor Bran showed a video highlighting his time in the Mission which proved to be an emotional moment for the president as he expressed heartfelt thanks and appreciation to his ministerial colleagues and all the members for their love and support. Gifts were offered by the ministers within the Mission and Pastor Jacques Venter from the British Union Conference (BUC) prayed on behalf of the congregation for God's continued direction in Pastor Bran's life as he moves on to new responsibilities.

The speaker for the day was Pastor Raafat Kamal, President for the Trans-European Division. He began by asking the congregation the question Jesus asked His disciples, "Who do you think I am?" His sermon focused on three main points within the context of the Three Angels' Messages: the transcendence of Jesus and our need to glorify Him; the uniqueness of Jesus, that Christ alone is sufficient for all things in every experience we go through, and thirdly, we are to be conquerors not just over sin, but to go forward in the strength and power of the Lamb with the authority given to us by Christ. His closing remarks was an appeal in response to the mandate of the great gospel commission, "God wants to achieve His purpose in your life…will you go?" 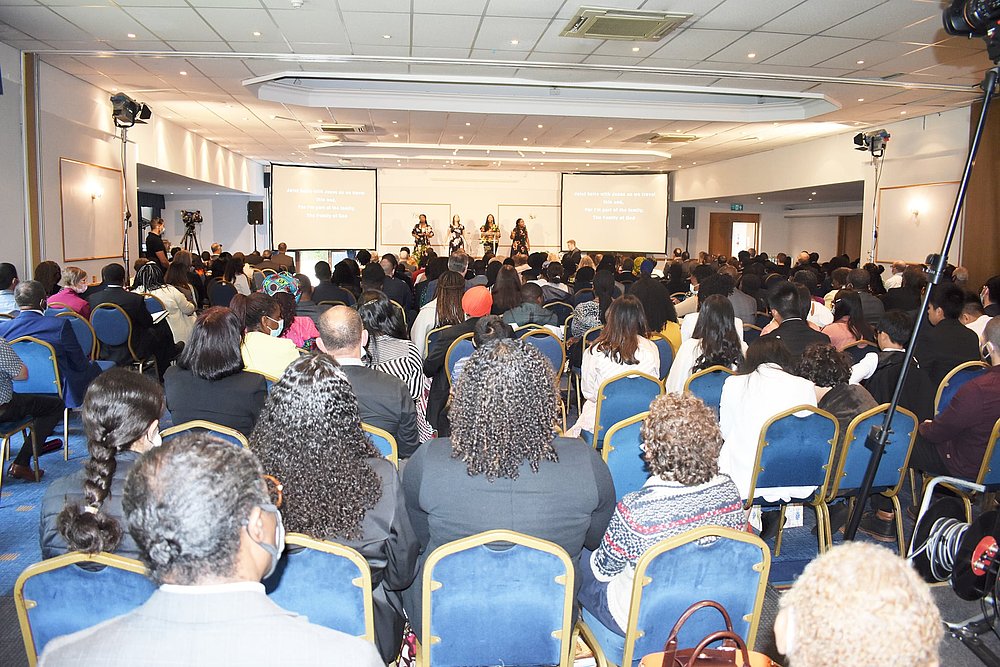 The morning service was the perfect blend of inspiring singing led by the praise team, impactful testimonies of God's hand at work and a message that challenged each one to be available to the call of God. Raafat Kamal often repeated the phrase , "when God puts something in your heart to do...do it!"

Being a sunny day, lunchtime was an opportunity for members to assemble outside. The atmosphere was one of exuberance as members who hadn't seen each other physically for the past eighteen months found much-needed catch-up time.

Following lunch was the ordination and commissioning service. Two ministers were candidates for ordination, Pastors Louis Amakye (Telford and Wrexham churches) and Jeremy Johnson (Telford, Shrewsbury and Newtown churches), whilst Pastor Adriana Fodor (Carmarthen and Ystrad Mynach churches) was to be commissioned to the gospel ministry.

BUC Ministerial director Pastor Eglan Brooks led the proceedings for the afternoon welcoming and introducing the candidates and the pastors chosen to present them to the congregation.

Pastor Kamal spoke to the ministers. He challenged the candidates to keep asking yourself the question, "why have I been called to ministry? ...your why has to be large enough and deep enough." Kamal emphasised the point that our purpose for God's calling should be deeply rooted in God's word. 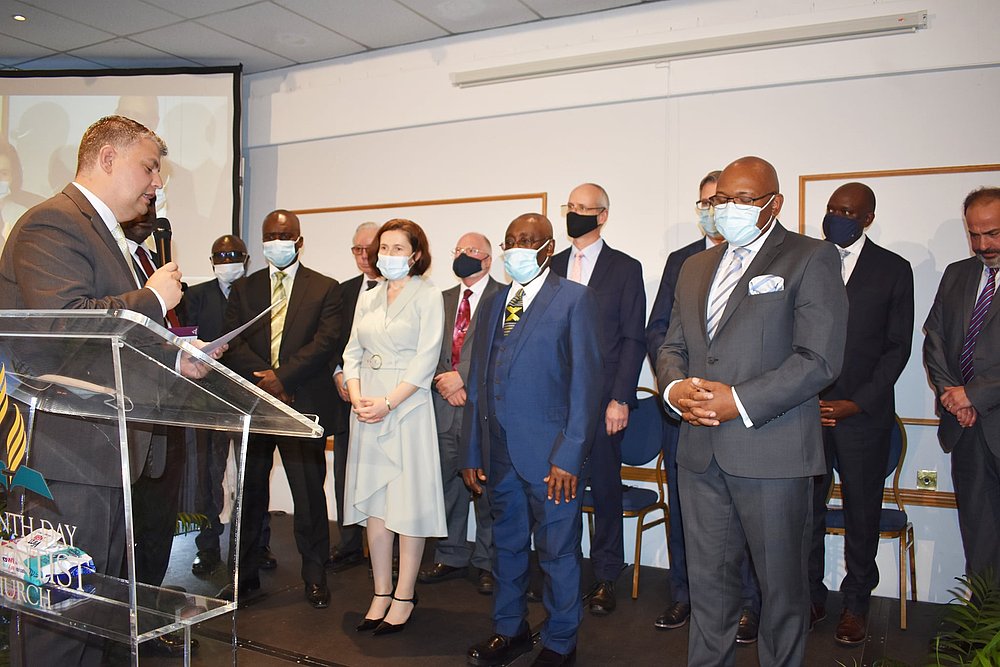 With the prayer of dedication given by Pastor Brooks fellow ordained ministers in attendance joined in the 'laying on of hands'. Pastor Bran gave the charge to the newly ordained and commissioned minsters and Pastor Jeremy Johnson gave the response on behalf of his colleagues. In his response Pastor Johnson said with fervency, "God's call to ministry is never an independent thing, we can't do ministry alone, 'it's not by might nor by power but by My Spirit says the Lord.'''

It was truly a high day for all who attended and for those watching online.