‘Christmas won’t be Christmas without any presents’. That oft-read introduction to ‘Little Women’ would certainly apply to Christmas 2020 in a lot of homes throughout the United Kingdom. It was precisely this fear that led Pat Walton to appeal to Stanborough Park Church members to be even more generous in their donations for that year’s Annual Toy Service as toys would be ‘even more needed than ever’ as she said. Members did not disappoint her and an even bigger display of toys and gifts were spread across the platform this year leaving no room for the platform party who found themselves sitting on the church pews during the service! 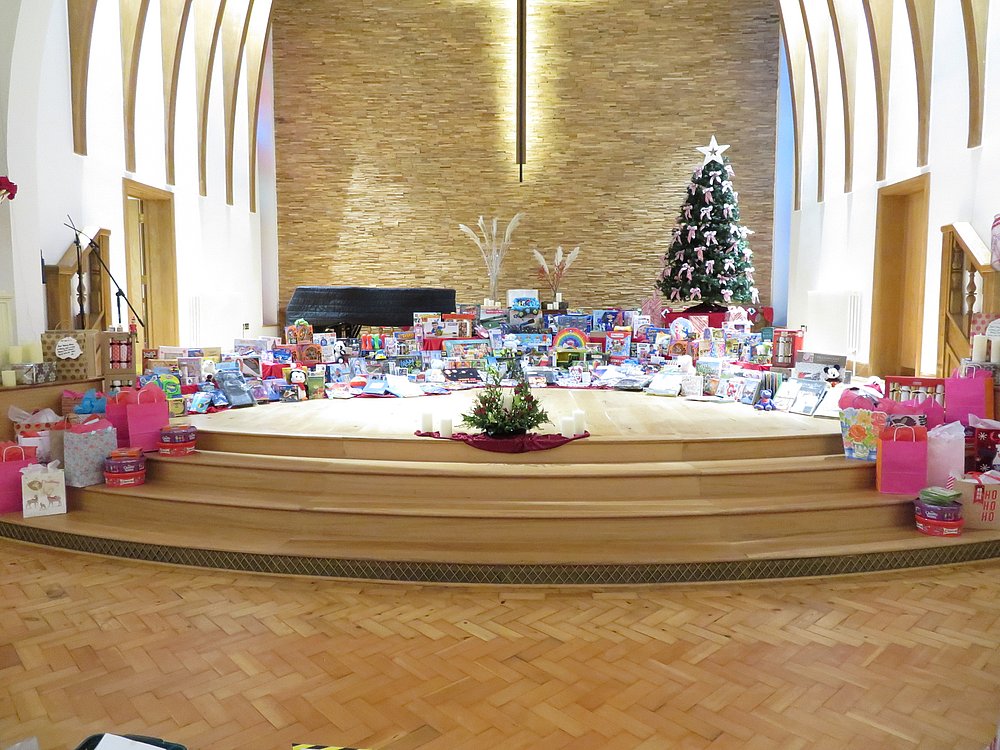 This was the church's 59th service and as usual the Mayor of Watford was in attendance to receive the toys on behalf of the town’s needy residents. As he said at the outset it was his third service and in accepting the toys he remarked that he regarded the church’s work for the town’s needy as ‘inspirational’ and hoped that he would be invited back next year when the church would once again be full of families, carols and the usual warm atmosphere. Certainly a contrast to the situation he was currently experiencing with a small, socially-distanced, mask-wearing congregation and no carol singing. His predecessor commented year on year that for her Christmas always started with her attendance at the church's Toy Service!

It was certainly a Toy Service with a difference. The current situation called for some original thinking. The usual practice of a long crocodile of children across the front of the church placing toys in sacks held by the Pathfinders would have to be abandoned. Instead Pat, aided by Audrey Balderstone, organised a drive-through donation event outside the church the previous Sunday afternoon.

Unfortunately many members now live a considerable distance from the church so driving any distance under current restrictions meant that only those living within a relatively small radius of the church could participate. Nevertheless a steady trickle of cars made their way up the church drive disgorging children who made their way towards the eagerly-proffered sacks to deposit their offerings, some little more than toddlers who were clutching toys almost as big as themselves. One member also brought with her a small bag packed by her work colleagues suitable for a homeless woman this Christmas.

Having stood outside in the biting cold for several hours the sacks were hastily picked up by the frozen volunteers and taken to secure storage in the church hall at the end of the event. Those who had been unable to come in person had donated cash for Pat to purchase toys at a later date, again demonstrating great generosity as she said that she had received more money than she had ever had.

The following Friday afternoon Pat and Audrey and their helpers assembled the display the display of donations on the platform in readiness for the service the next morning. In addition to toys there were gift bags for parents and carers and new duvet covers for those children needing them – something which had been mentioned by one of the schools. In her address to the church Pat recalled the early Toy Services when her Father would go out delivering the toys in person in a pony and trap – often dressed as Father Christmas! This year she found herself presented by a social worker with a list of 25 names of children, complete with age and gender, requesting an individual present for each of them! 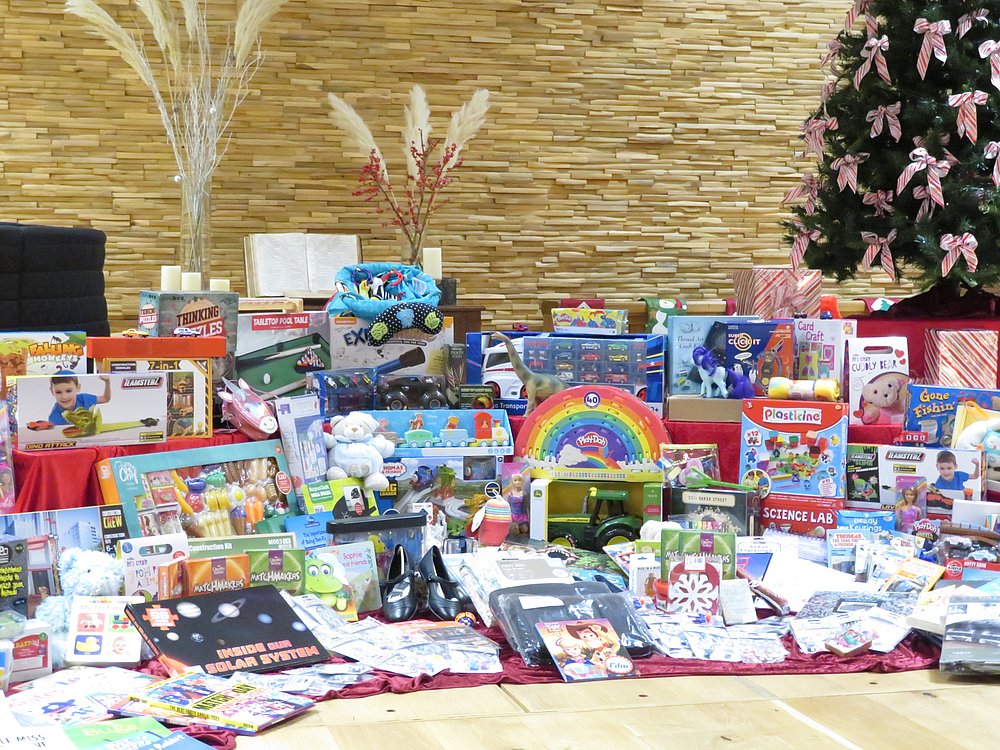 However, the annual event had actually begun even earlier this year. Early December  saw a visit from a volunteer at the local Refugees’ Association. There the volunteers needed to pack their Christmas bags early and Pat arranged provision of suitable gifts to meet the needs of their 117 families, 27 single men and 14 women.

The 'Livestreamed' Toy Service featured carols and music from archived services and children's choir ‘Angel Voices’ provided a Zoom rendering of a carol. There was also a live piano duet of ‘It Came Upon a Midnight Clear' by two of the church’s children.

Pastor John Ferguson gave the address, dealing with not just the birth of Jesus but his whole life and death, beginning and ending with a quotation from American Adventist minister Morris Venden: ‘We are living in a time where centuries are compressed into a few short years. Where names of great people appear on the horizon, flicker for a moment and then are lost forever in a sea of forgetfulness. Yet Jesus grows brighter and more lasting with each passing day.’

After the event the gifts were gathered together and stored securely awaiting collection by or delivery to the church’s Welfare Department’s regular clients. 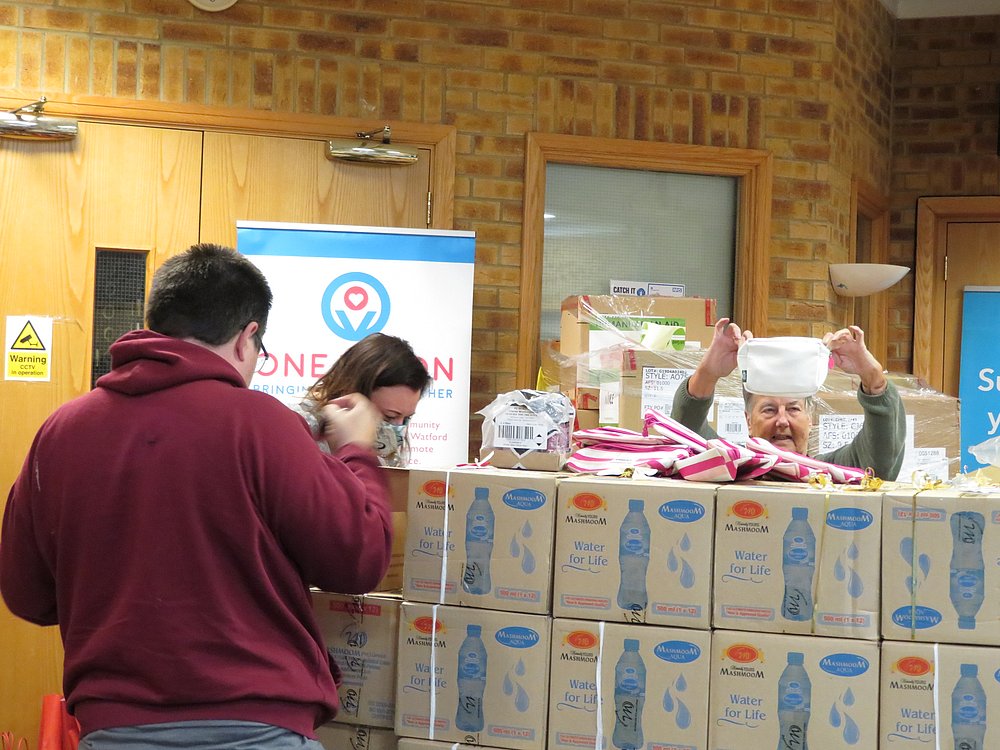 The following day church member Enoch Kanagaraj’s ‘One Vision’ Project organised its own Watford-wide ‘Drive-through and Drop Off’ event in the church’s car park. ‘This was organised by the members of the 'Watford Youth Council' which was instigated by 'One Vision' earlier this year.

'One Vision’ has recently been recognised as a charity and awarded ‘Trust’ status with Enoch as its chief executive. One of the Trustees is former Watford FC and England international footballer Luther Blisset who has a strong connection with the town’s charities. Encouraged by his social media message that morning, along with heavy advertising of the event via the internet and social media, many cars pulled into the church car park throughout the day bringing donations. Some containing just a single or a few articles, others were fully laden.

Coupled with large corporate donations the church halls and lobbies of the lower ground floor were piled with boxes, bags and sundry items waiting to be sorted and delivered to nominated needy local families. Elsewhere a group was busy sorting a large delivery of toiletries into specially designed bags and the town’s Member of Parliament was to be found helping wherever he could lend a hand. According to Enoch, 'We had over 5000 gifts and Watford Youth Council will be sorting all out to the community.'

Hopefully many families and individuals in the Watford area were able to enjoy a better Christmas than they had anticipated thanks to the generosity and the work undertaken by members and volunteers at the church during December.