A football legend and local celebrity visited the 'One Vision' hub based at Stanborough Park church to see for himself the efforts to help those adversely affected by the current pandemic − and ended up agreeing to be an ambassador and patron.

Luther Blissett, a former Watford FC and England player, visited the lively hub at the church on Thursday 29 October to see for himself the work that was going on there providing food and help to local people in need during the current crisis. He was representing Watford FC's Former Members' Club which was set up in 2009 by former striker Neil Price and one-time Watford and England manager Graham Taylor, who is still fondly remembered in the town. It was organised to bring former  players of the club together, build a fund to help those former players who are less well off or struggling and give help in the local community.

Now in his seventh decade, and many clubs later, Luther has retained his links with Watford through his involvement with Watford FC's Former Members' Club. It was this desire to help the local community that brought Luther to One Vision to see for himself the work that the project is doing to provide help to those in need during the current health crisis.

When asked by One Vision's Cllr Rabi Martins if he could spread the message of One Vision's work to his fellow members, he replied:

Luther Blissett was sufficiently impressed with what he saw, that in addition to spending two days delivering meals and groceries to needy recipients, he also agreed to become an ambassador for and patron of the organisation.

After his visit he 'tweeted', "absolute pleasure to be working with the One Vision team! Delivered a car full of food thanks to help from Ros and her amazing community angels."

Luther Blissett began his professional career at Fourth Division Watford Football Club back in 1975. He was a prolific goal scorer during his time at the club and by the time he moved on in 1983, some 73 goals later, Watford was in the First Division. He also scored three goals during his time with the England team between 1982-4. Hence, he has been all but canonised by the club's supporters!

According to One Vision Chairman Enoch Kanagaraj, "One Vision has delivered over 10,000 hot meals and 15000 grocery bags. Now getting geared up for Christmas − no one should sleep on an empty stomach and loneliness should not have a place to hide." 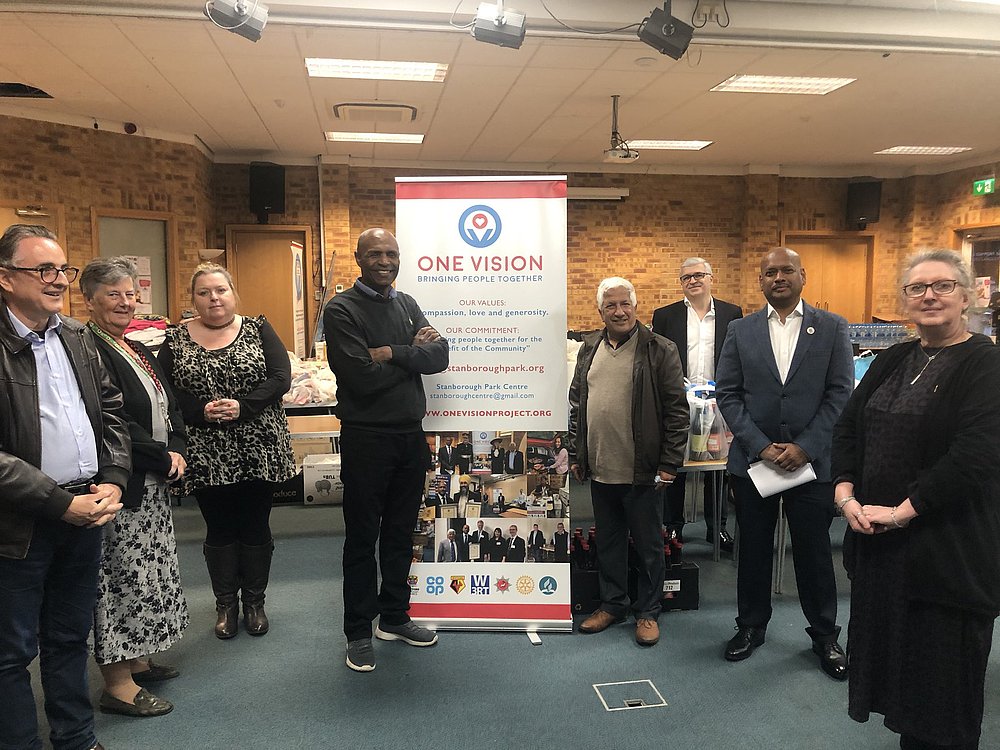 Currently providing more than 4,000 hot meals and around 900 grocery bags per week, volunteers deliver to all Watford postcodes plus parts of neighbouring St Albans and Hemel Hempstead. The organisation is desperately in need of volunteer drivers prepared to do one shift a week from 12:30-4:30 pm and would welcome offers of help from anyone in the area with time to spare.