My dear Clyde started his journey on 26 July 1957, in Nottingham. His parents had come over from Jamaica. Clyde thought he was their first child; then came a few little sisters.  One day he came home from school to be met by 3 strangers, his 2 older brothers and an older sister, what a shock.

As the family grew, he always was hoping for a little brother but to no avail. He leaves behind 2 brothers and 6 sisters.

School days were often traumatic, especially after he passed his 11+ and went to High Pavement Grammar School; young, gifted and black, in the days when black lives didn't matter,

It was in 1974 that we met at church; he was part of the choir and I'm sure he spent the whole time staring at me. Our whole friendship and later our courtship revolved around church meetings.

On my first visit to his family home, he was sat at the piano holding his youngest sister, Dahlia; he looked so comfortable with a baby on his lap.

One of his great loves was music; he played a few instruments, piano, guitar, electric bass, double bass, saxophone plus let's not forget, his beautiful singing voice. He sang in the church choir and then formed his own choir and they performed at the Albert Hall, Nottingham.

Later he joined the gospel singing group, Exodus, as a double bass player. Exodus performed in the UK and abroad, even appearing on TV.

Only a few years ago his love for singing made him join a barbershop choir The Major Oak Chorus. Yes, music was a huge part of who Clyde was, but there's much more to this big man with the big heart.

As I said we met in 1974 and married four years later. We were soulmates and despite the stresses and tensions in a marriage we remained married and best friends until the day he died. I have to say, Clyde wasn't perfect, but we did have a lot of adventures together. 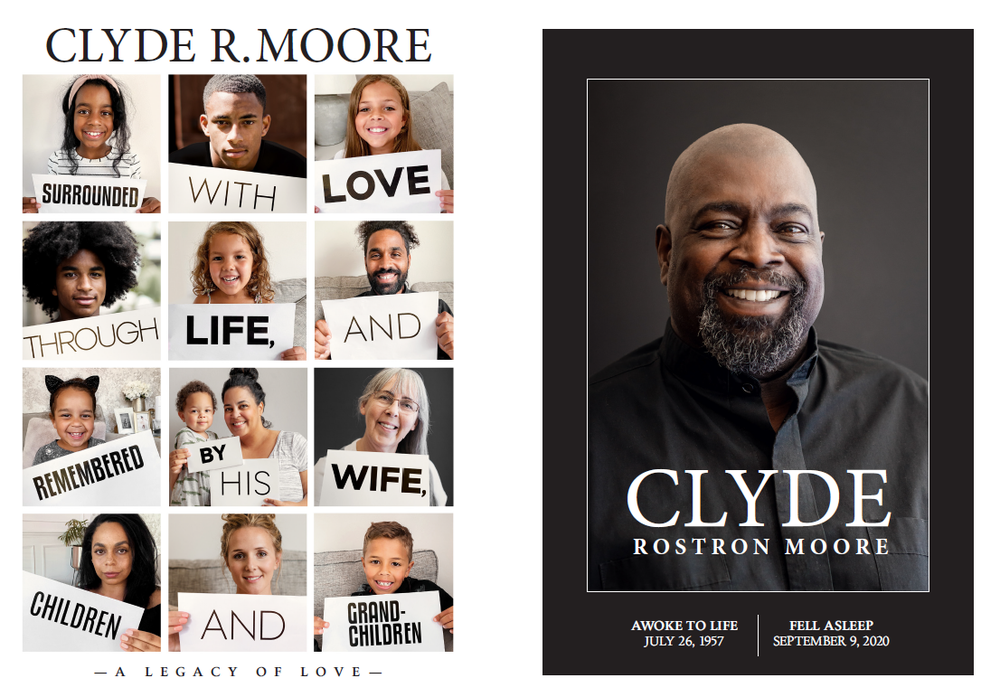 Our children and then our grandchildren were his delight, he loved them all, and I know he leaves a big hole in all of their lives. In all of our lives.

I mention them here, our daughters Jeanelle, who we lost 5 years ago, Heidi, and Vienna, and our son Dijon. Also, daughter-in-law Michelle and son-in-law David. Altogether they gave us 8 beautiful grandchildren, Jakeda, Jahfari, Jasmine, Milan, Dijon junior, Belle, Miami and Grayson.

Clyde was a gentle giant, loving, generous, kind, always ready to help. His amazing warm smile made anyone feel at ease. He was strong, stern at times, ask the children, he was wise beyond his years, but a ready listener. He has touched many lives and shared his faith in our loving God.

The other love of his life was the Lord Jesus. Having been brought up in the Church, he was baptised as a teen, and often took prayer meetings, Youth programmes and got involved with Pathfinders and campaigns. In his late teens he felt drawn to the Ministry, however that didn't happen till he was 38.

On leaving college he did struggle to get employment, eventually he became a Postman, then a few other jobs before joining the Nottinghamshire Constabulary in 1982. His collar number was PC 1974 − that was a special number for him. To his police friends he was known as CR. He did enjoy the job and made many lasting friendships. I would like to thank the many officers who have shared their memories of him with me.

After 12 years he left the police force and then planned to become a teacher. However he transferred his studies to Newbold College where he trained for the Ministry; Jesus had caught up with him, this was God's plan. He graduated in 2000 with a Master's in Religion.

We moved to Peterborough to await a posting but whilst there, he was involved in a head-on car crash in which he suffered a broken hip, broken femur, several teeth and toes were also broken. A DVT developed which caused his big heart to get a little bigger, not in a good way. That crash had a major impact on the rest of his life.

Still on crutches he was interviewed and soon took up a position as church pastor in Cardiff. Again, I want to thank the members for their support. In Cardiff we developed our passion for Family and Children's Ministries. Those were fun years as well as challenging years. Clyde was ordained and was then moved to another district. During his time with the Shrewsbury, Telford, and Wrexham churches his health began to deteriorate. He left church employment in 2015.

He then trained as a Civil Celebrant and has often stood in this same chapel conducting funerals.

He volunteered with the Citizens Advice Bureau and became a valued member of their staff.

Early last year Clyde fainted and split his lip, that was the start of the end. It was stitched, got infected needed restitching. The trauma of it all caused his big heart to weaken.

In January this year he was told he had months to live. We continued to put our faith in God and I praise His name. God let him see his birthday, which he enjoyed so much, he saw my birthday too.

But his big heart was so weak and on Wednesday 9 September he fell asleep holding my hand, and trusting in our Savour.

The funeral service held on Friday 2 October can be viewed here.