Soon after a highly successful Adventurer and Pathfinder Bible Experience Union Final which took place entirely online via the Zoom platform on Sabbath 14 March 2020, the news came through that the worsening coronavirus situation meant the end of physical gatherings, church closures and meeting shutdowns.  Families across the Union found themselves in lockdown with no opportunity to meet for Sabbath Schools, AY programmes, Adventurer or Pathfinder clubs or church services.

Hundreds of youth logged in, watching and contributing to the online discussions, talks and studies.  Not content to just run the programmes only for the Youth Week of Prayer, the online forums have continued in the Conferences with almost daily programmes including health & wellbeing slots, Bible studies, book clubs and more. The youth in these territories are being well ministered to during these uncertain times.

Knowing that the youth are being well looked after, the Union is making sure that the Adventurers and Pathfinders are not being forgotten.  As clubs are no longer able to meet and with the children falling behind in their class curricula, and after an urgent meeting with the regional Pathfinder Directors, Pastor Dejan Stojkovic introduced the e-Club Pathfinder tutorials on Sunday 29 March.  Using the BUC Youth Facebook page live and Zoom platform trialled so successfully for the ABE and PBE testing, hundreds of Pathfinders and their leaders linked in for the inaugural session at 10 am.

Paula Carillo, BUC IT Director and previous club director at Stanborough Park church, taught the basics of British Sign Language and had an enthusiastic audience signing and singing along with her. 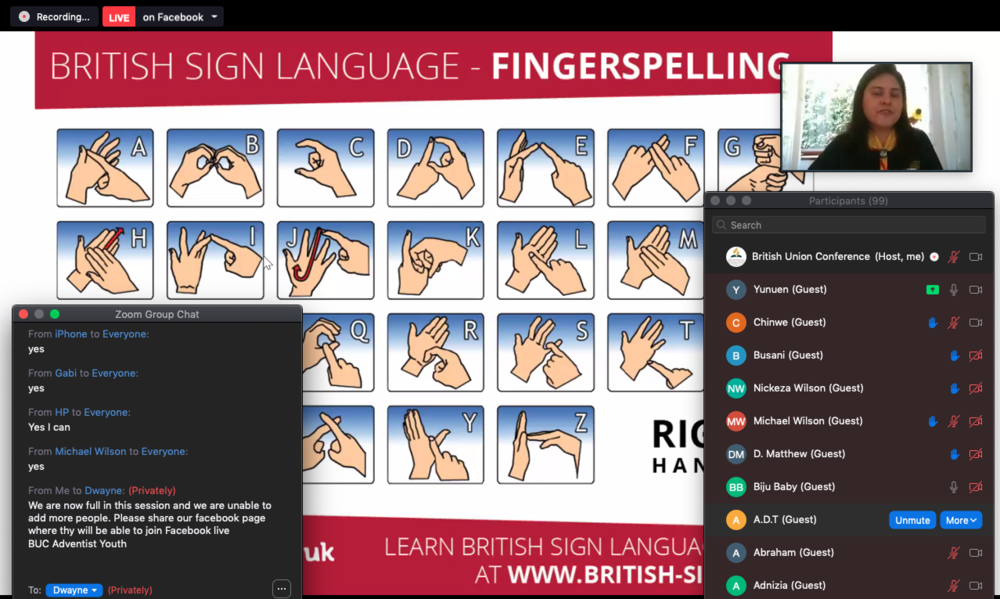 This was followed by Clifford Herman presenting the Peacemaker e-Honour. 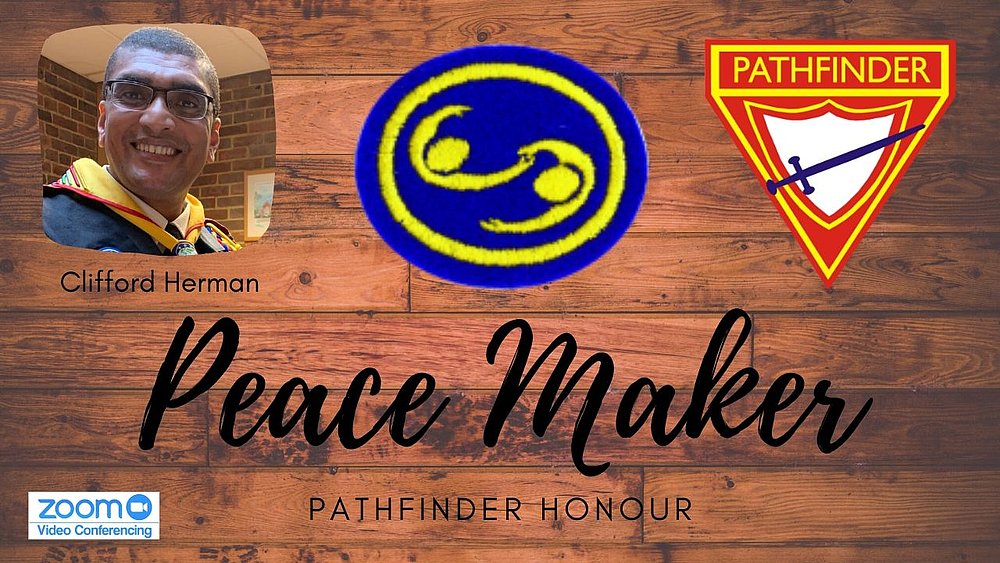 Finally, but not least was a very informative and well-presented Fire Safety e-Honour from Jason Edwards. Jason is a firefighter employed by the Avon Fire & Rescue Service.  He was thoughtful enough to take those present on a 'virtual' tour of his fire station since a real tour would not be possible under the lockdown circumstances. 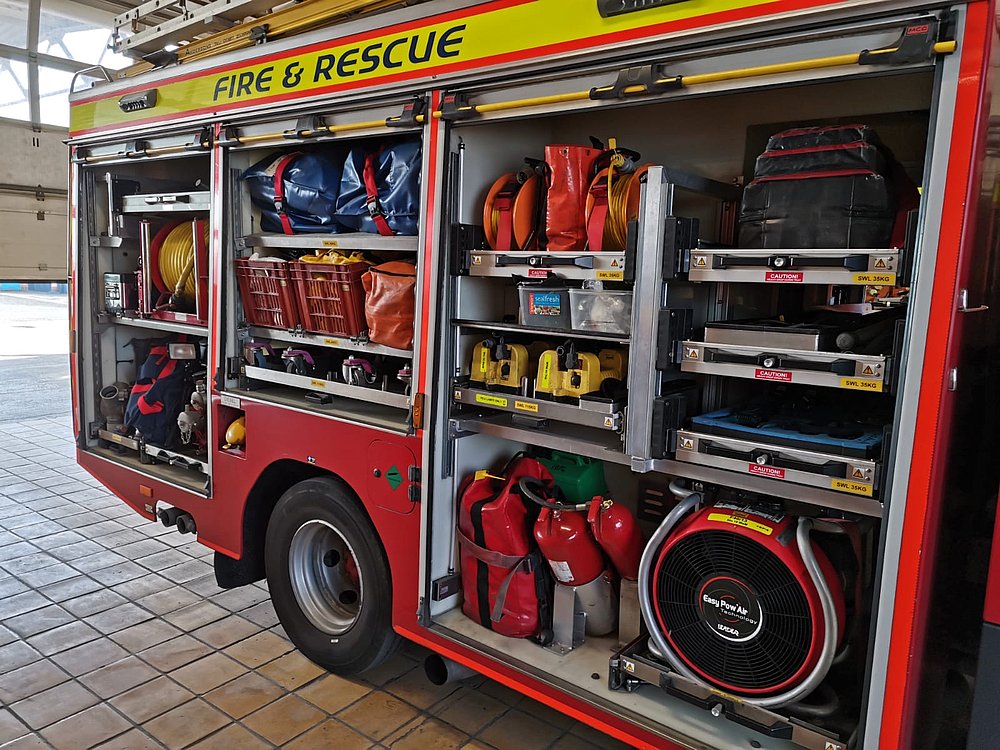 Pastor Clifford is encouraging the SEC Pathfinders to study for their honours at home as well, by introducing a set of Honours which can be achieved in their own time.  The details are all on the SEC Pathfinder website and include pre-recorded video sessions, worksheets and tests. He has kindly agreed to be a regular presenter for the live BUC e-Honours.

The community spirit on Zoom was so encouraging and it was as if the children, sitting in their living rooms with their families nearby had gathered for an extended club meeting. Messages were flooding in during the live sessions via Facebook, Zoom and WhatsApp, contributing encouraging comments, valid questions about each subject, and club leaders sharing their joy on Facebook for this opportunity to join a ready-made programme for the Pathfinders unable to attend club meetings and see each other. One father of three from Worcester in the NEC said it was the best morning his children have spent since the isolation period began.  (Selection of quotes below)

Pastor Dejan said after the first session: "Despite the country being locked down we are still able to encourage the children to develop their skills and maintain their relationships with each other during these trying times. There was a real connection element to the event on Sunday – it was like an online club which is promoting the spiritual, social and group learning experience they would usually have had in their regular clubs."

The enthusiasm was so great for this large-scale e-Club premier that not only were there participants from both the North and South England Conferences, and the Irish, Scottish and Welsh Missions, but there were also people who joined in from many countries around the world, including Dubai, the Netherlands, Bosnia and Herzegovina, the Virgin Islands, Australia, Serbia, South Africa, UAE, Montserrat, St Vincent, Norway, and the USA. The Trans-European Division and the General Conference Pathfinder Directors have both shared the event on their social media platforms and encouraged their readership to join in.  Pastor Gary Blanchard, General Conference Youth Ministries director, will be teaching an honour next month too. Even though the timings were not ideal for those from the USA and the Caribbean, we still had many participants from those areas who woke up in the early hours of the morning to join in!

With interest growing daily and a loud call from Adventurers and their leaders to also provide an online programme for them, this coming Sabbath, 4 April, the Adventurer e-Club will launch from 2-4 pm with the Rainbow and Ants e-Awards, the very first to be taught live.
Sunday 5April will be the final morning for the Pathfinder sessions (10 am - 1 pm) before it moves to its new early afternoon slot starting at 2 pm from 11 April.

Those who miss the live sessions needn't fret as they can catch up using the YouTube links and download the worksheets and tests.  Full details are posted on the BUC Youth Ministries website.  Most honours involve some homework elements which the students need to complete in their own time before filing everything in their club folder for assessment when clubs do finally resume.

Even in these troubled times, when we are not able to meet in person, providing the e-Club online programme for the Adventurers and Pathfinders and the Youth Facebook/Zoom forum each evening is proving to be a vital link for the children, youth, their parents and leaders too.  May God continue to bless and guide as we navigate these uncharted times together.

Joe Sword − That was awesome. Thank you, Jason. God bless