Just days after presenting its own One Vision Awards Ceremony at Stanborough Park Church, Watford on International Women's Day, celebrating the contribution the town's women have made to the local area, the Adventist-led group found itself winning an award. It has been responsible for raising the profile of both the denomination and the church in the area and was one of 14 charities and local organisations which were winners at the 2020 High Sheriff of Hertfordshire's Award Ceremony held at County Hall on Thursday, 12th March.

According to One Vision's founder and Chairman, Enoch Kanagaraj, a Stanborough Park Church member, "One Vision is a group led by Stanborough Park Church. We engage with local community groups, charities and public services on issues which concern us all – equality, housing, health, welfare, faith and employment. It is well recognised in the community and has been awarded the Mayor of Watford's Audentior Award.

"The project is a networking and action group. We provide a forum for members to exchange ideas, seek and provide advice, share resources, information and skills, support each other in order to reduce waste and duplication as well as to enhance each group’s delivery capability."

The group grew from the church's Community Chaplaincy Service's intention of establishing and meeting individual needs in the immediate vicinity of the church. Encouraged by the then Senior Minister, Pastor Jacques Venter, its leader, Enoch Kanagaraj started to engage the church in the community by holding Community Days, inviting representatives from various groups into the church to share their experiences either during morning service or as an afternoon programme.

As an employee of The Coop Enoch already had contacts with many of these groups etc through the organisation's community funds and projects. He saw how by combining together, sharing resources and not duplicating efforts all groups could work more effectively. He began contacting the groups and thus began the monthly meetings held in The Stanborough Centre and the concept of One Vision was born.

Towards the end of last year Hertfordshire groups were invited to apply for a High Sheriff's Award and its financial reward of £1000. There were four categories: Faith Group Community Projects, Integration, Social Justice and Stronger Communities in addition to Personal Awards. One Vision fitted the Faith Group Community Projects category and was one of this group's four winners. 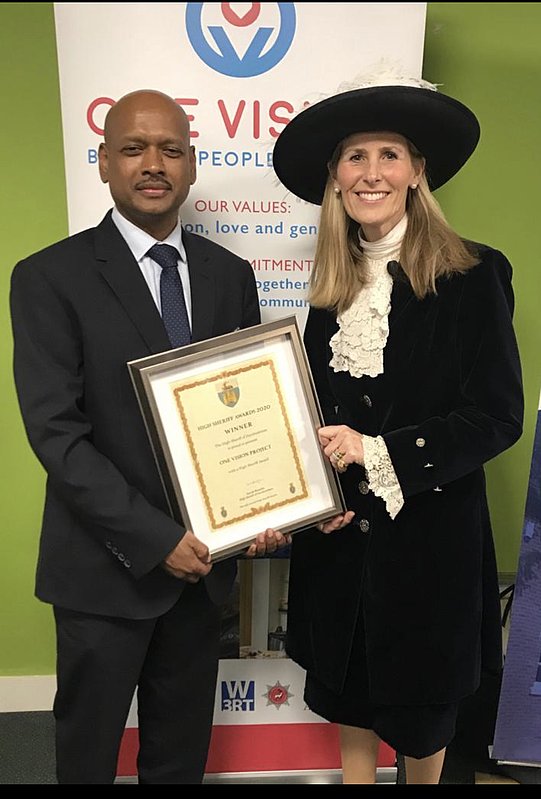 The High Sheriff's Awards are common to all counties and usually cover social justice and crime prevention themes. However, according to the outgoing High Sheriff of Hertfordshire, Sarah Beazley, this year was rather different.

"... the Awards will also reflect my interests in supporting and promoting stronger communities, integration, and work with and across faith groups. We were delighted to receive a large number of applications for the Awards and it was an extremely difficult job to reduce these down to a shortlist. All those shortlisted were visited by  panel members (9 in total) and .... we have decided that all those shortlisted this year will receive Awards and cheques. They are all very worthy winners."

Before presenting the award the High Sheriff explained what had particularly impressed her about One Vision and its work in the following words:

"It started out with a desire to engage the congregation of Stanborough Park Seventh-day Adventist Church in community issues and has led to a well-respected and easily-replicated local project to bring all sorts of groups together to make Watford a better place for all. The One Vision founders realised that whenever everyone works together their aims, ideas and resources can be used more efficiently and effectively. And that's what I love about this group; it's all about being better and stronger together. They organise Community Days which are well-attended by lots of different local stake-holders and many small societies, representatives of the council, the Mayor, politicians, faith groups, the police and that means that rather than working in silos everyone can work together  avoiding duplication of effort and take a whole community approach to tackling charities."

"Currently the One Vision networking group includes around 38 small groups, charities and public services," Enoch explains. "We hold monthly meetings for sharing ideas and supporting each other’s delivery expertise. Through connections with Coop’s local causes and Food Share partners we have held Community Days, and raised the profile of the smaller and newer groups as well as enabling established groups to increase their delivery capability."  (As an employee of the Coop Enoch has been able to obtain a lot of funding for his projects from the organisation's community funding schemes.)

Far from being just a 'talking shop' One Vision has:

The award proves that mighty oaks really do grow from little acorns and there are plans afoot for One Vision to grow even mightier. Expanding on this the Chairman says, "Our future plans are to raise the profile of One Vision and extend our reach to smaller and emerging groups. One Vision will continue to provide a collective resource to serve the various needs of the community allowing each group to become stronger and self-sufficient." 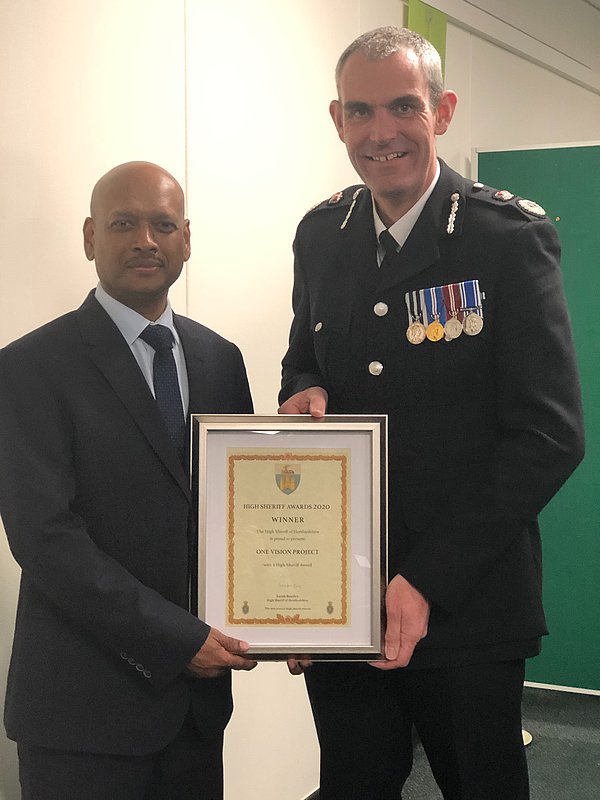 Enoch was proud to accept the award on behalf of the One Vision Project from Hertfordshire Constabulary's Chief Constable, Charlie Hall.  Speaking for all members he says, "We are humbled to receive this award as we continue to work together with the community to make Watford an even better place." 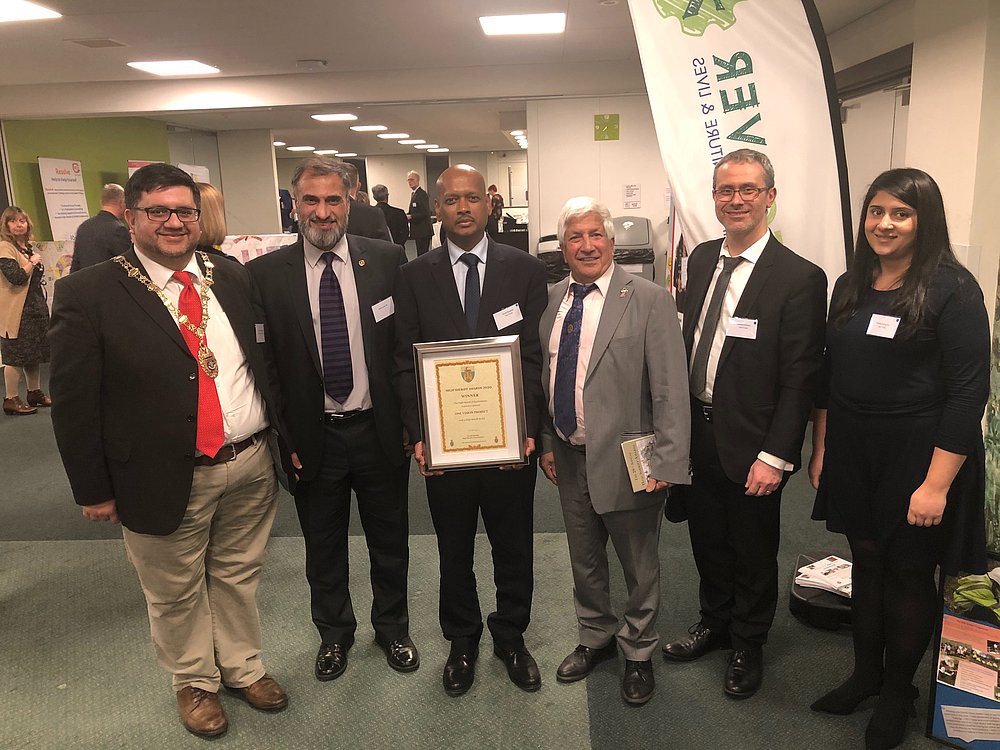 Winning the award with its £1000 cheque has meant even greater recognition for the group having obtained an Audentior Award last year and also one from Hertfordshire Constabulary. It has proved an excellent way of raising the church's profile in the local community and, although Enoch's contacts helped in setting it up and funding was readily available, as the High Sheriff said, it's an easily replicated project - bringing communities together at the same time.