In James 1:22 the Bible says, "But be ye doers of the word, and not hearers only, deceiving your own selves."  A 'doer of the word' is probably the most apt way one would describe Elder Lancelot Scott – a Caymanian resident, who attended the South England Conference (SEC) Camp Meeting of 2019 and heard the PARL (Public Affairs and Religious Liberty) presentations by Pastor Brighton Kavaloh (PARL SEC Departmental Director) and Gina Abbequaye (British Union Conference [BUC] Education Director).

Elder Scott realised that the PARL challenges that the Seventh-day Adventist (SDA) Church is facing today in the UK, are the challenges that the SDA Church in the Cayman Islands is to face tomorrow.  Unlike most though, Elder Scott did not just think and do nothing. He spoke to the Cayman Islands Conference and not only did they invite Pastor Kavaloh, they also included Gina Abbequaye, Sonia Munroe, and Alex Nsimbi to provide some much-needed insight into PARL and education challenges faced by the Church.  Elder Scott also insisted that the whole team visit within the next 4 months. He laid the plans with the Cayman SDA Conference, and their administration wasted no time in formalising the invitation to the SEC and BUC. Sonia Munroe and Alex Nsimbi were invited in their capacities as Directors of Policy and Operations respectively at AdventRLP. 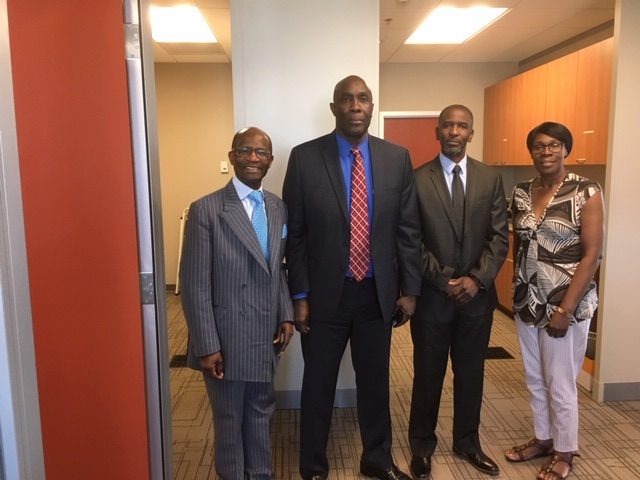 On arrival in Grand Cayman − George Town, there was no time for feeling jet-lagged.  The team from the UK was involved in a range of presentations, with topics ranging from the redefinition of marriage (with specific court cases cited), Relationships Education and Relationships and Sex Education, the clash between 2 of the protected characteristics in the Equality Act 2010 (religion/belief, and sexual orientation), discrimination in the workplace, to the necessity of wisdom when representing God.

It turned out that these were hot topics as the Islands were right in the midst of a same-sex legal case.

Along with the above mentioned presentations at different venues, Pastor Kavaloh, Gina Abbequaye, Sonia Munroe and Alex Nsimbi were invited for 2 interviews on the Cayman Islands SDA radio station – Praise 87.9FM, spending over 1.5 hours delving deep into religious liberties issues, and emphasising the fact that amidst the challenges ahead for the Church, there were great opportunities available to represent God.

Given the extreme popularity of the radio station on the Islands, with 70% of the listeners being non-Adventists, coupled with the fact that the station's manager and main presenter Dwayne Euter is such a household name, it's clear that the interviews had a very large audience. This was confirmed by Mr Euter whose telephone switchboard apparently lit up during the interviews.  He was the first to acknowledge that the topics dealt with were so important that he wished there was a lot more time allocated for the interviews.

Pastor Kavaloh, Gina Abbequaye, Sonia Munroe and Alex Nsimbi could only thank God for allowing them the opportunity to travel to the Cayman Islands to assist not only the Church, but all Caymanians in standing up for their religious liberty during such a time when their liberty of conscience is under an unprecedented threat.  The message was clear − rely on Christ's direction, so that you can exercise the 'wisdom of a serpent, but harmlessness of a dove'.  That's when the prevailing challenges will become opportunities to speak for God, and also draw others to Him.