To describe camporee in one word would be doing it injustice; it was a rollercoaster of emotions, feelings and weather. This became all too clear before we had even arrived on-site. The camaraderie in the coach set the mood for what was to come. The energy in the bus was adrenaline-charged, you would have thought that travelling through the night would give people a chance to sleep but alas, it got to 5am and there were somehow soldiers who could still fight anyhow. 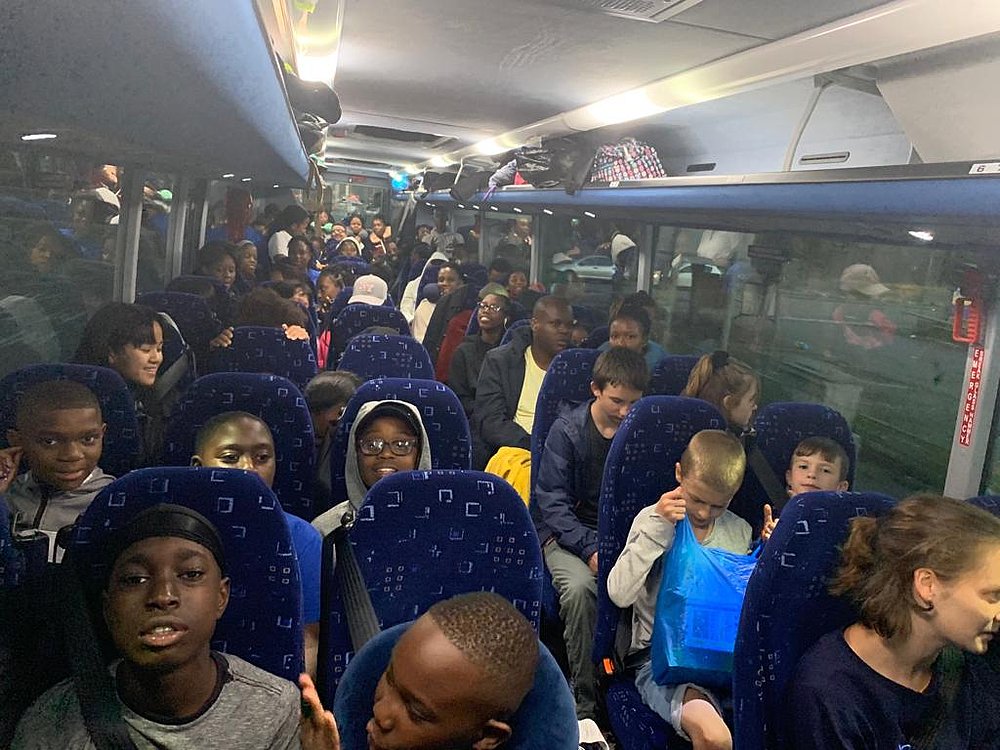 We got a warning that the weather down south was warm but not when the Scots arrived. Setting up camp was a true test of the giants. The wind and the rain reminded us who is King. The weather was relentless, once one tent was up, another came down, and it was like the wind was playing whack-a-mole. However, by evening the wind had calmed down and most tents were ready. 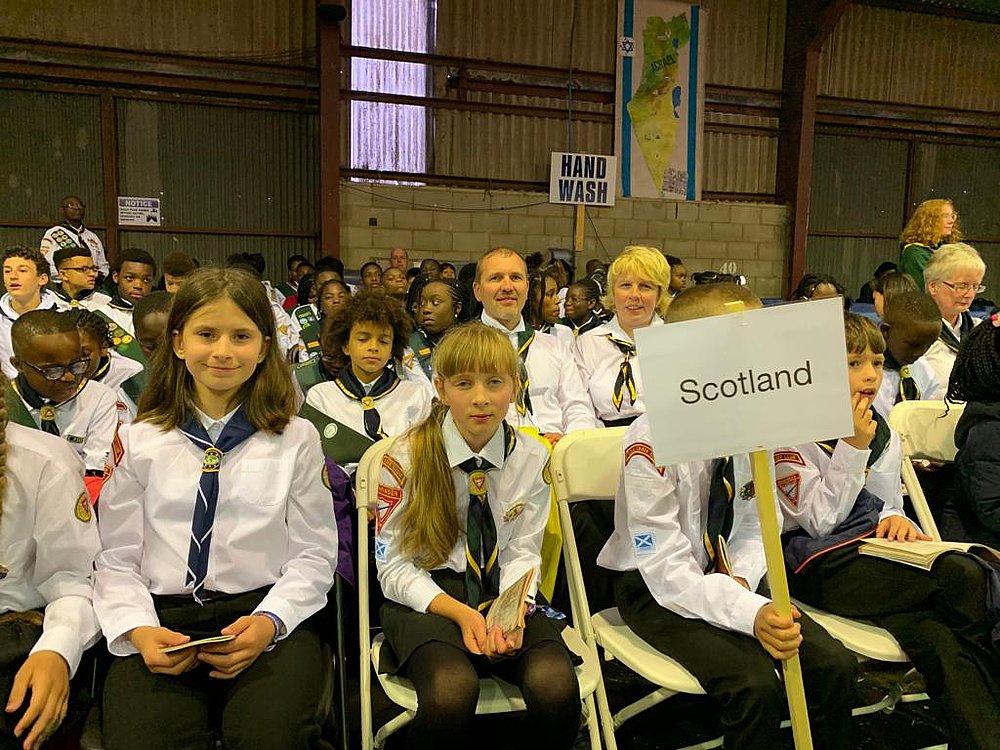 Over 3000 Pathfinders from across Europe and other parts of the world convened at The South of England Agricultural show grounds. The auditorium was packed and the stage was well decorated to look Egyptian. The daily worship held in the morning and evening were truly spiritually uplifting. Melissa Myklebust (Norwegian Pastor) the main speaker skilfully walked us through the exodus of the children of Israel. She started right from creation, the fall, the search for God and ending with a real exodus experience on the Sabbath.  The praise team were gifted enough to make everyone song feel like a concert.  The general energy and atmosphere surrounding the service was something that cannot be put into words. The congregational participation and lively hosts were a strong combination that led to thorough enjoyment. The biggest blessing was the Baptism of many Pathfinders including our very own Laura Kazuwa from Edinburgh. We also continue to pray for those of our Pathfinders who expressed a desire to be baptised. 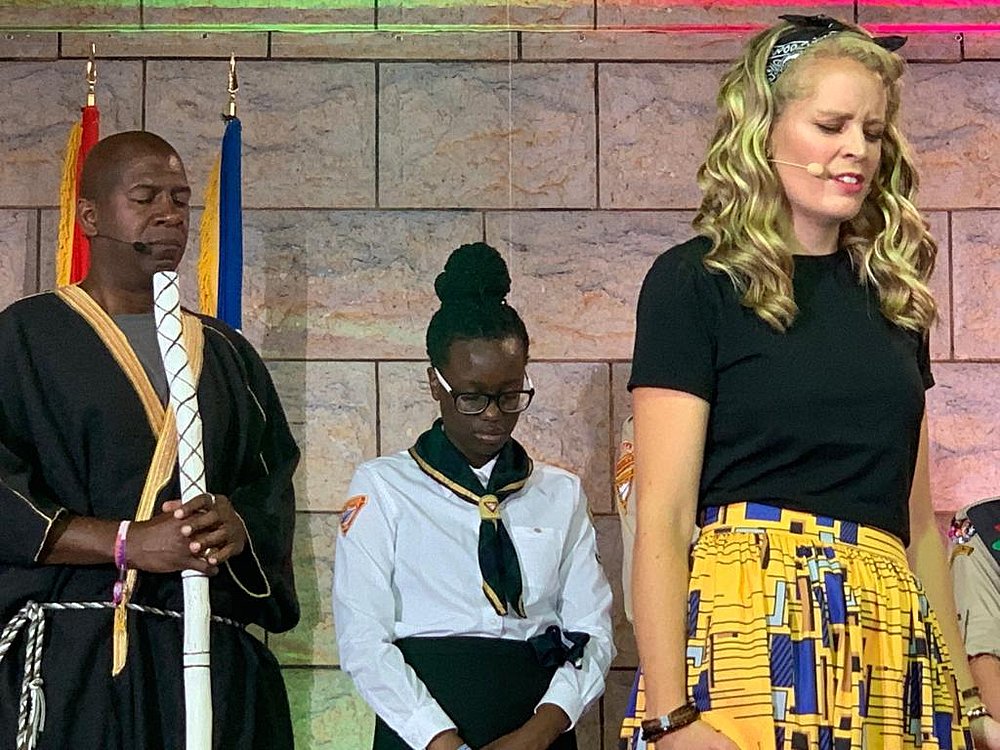 A wide range of activities were available; physically challenging, art and craft and knowledge based. Unfortunately, it was not physically possible to participate in all of them. It looks like everyone seemed to have enjoyed themselves. The temperatures gave a sense of being on a perfect family holiday. Activities were also a great opportunity to socialise and make new friends, whether it is your volleyball teammate or your new combat archery arch-nemesis. As part of the Scottish Mission vision, two new honours were developed: Bagpipes and Kilt Making honours made a dabut and these received a huge uptake at the Camporee. We thank Pastor Gabriel Perea and his wife Jessica for their willingness to be part of the development and teaching of these honours. 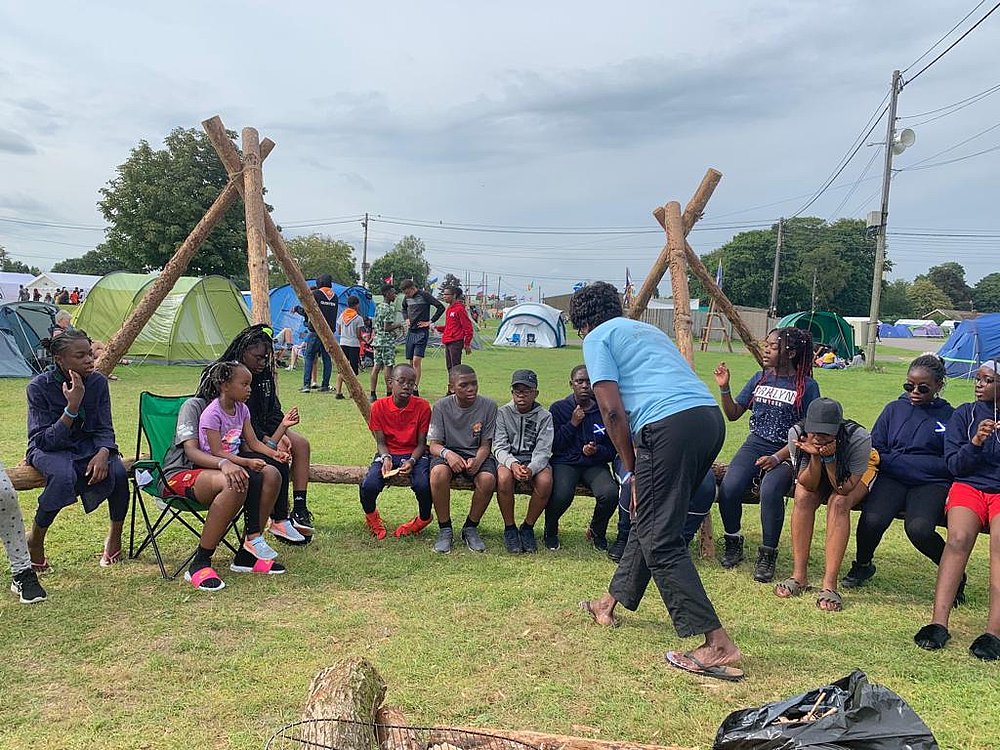 It was great fun, making new friends from different countries and also to learn about their cultures. One country, and campsite, that stood out were the Norwegians camped right beside us. They're very skilled and are capable of creating wooden masterpieces. Their campsite was littered with handcrafted hammocks and swings, almost like they had no need to bring tents. They were very kind to help us build up a few structures for our campsite that made whole camping experience more memorable. 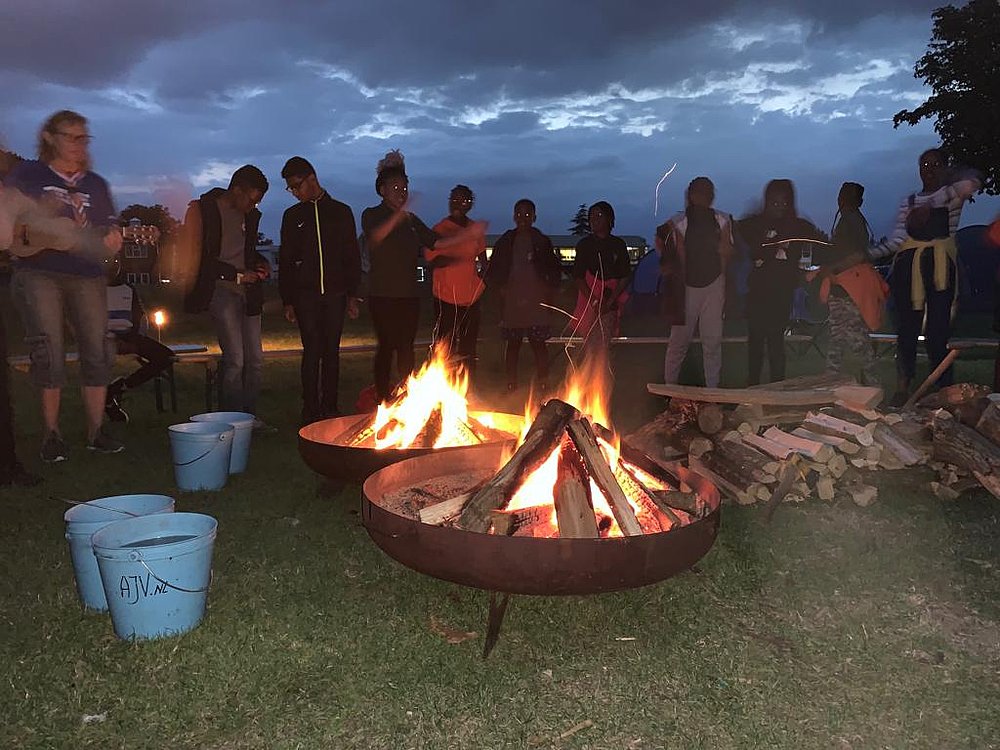 Usually people say camp food is ordinary but not with our Master (Clive Birch) who produced delicious meals everyday. To top our meals were Pastor Jimmy’s BBQ sandwiches; he is not just a minister of religion but Master of BBQ. Who needs meat when there is Pastor Jimmy’s meatless sandwich? The Pathfinders and Leaders who worked tirelessly to keep the dishes and campsite clean. The teams worked well together.

We received a lot of visitors who were fascinated by the Scottish Pathfinder scarves. We restricted trading our scarves with other pathfinders, so that we could sell the scarves on market day to raise money for ADRA Kindergarten in Tirana, Albania, and a housing restoration project in the Dominican Republic. Market Day itself was a huge success with a tremendous turnout rate, everyone seemed to bring out all the stops with their fantastic stalls filled with fun games and interesting things to buy. We had many items to sell from the different churches (Aberdeen, Crieff, Dundee, Edinburgh and Glasgow) that had taken their time to make things for sale. We were excited to even see our own President attracting buyers with his marketing skills. Our Pathfinder’s scarves were the best seller for the day, thanks to Mrs D Logan and her team, and Irene who were very kind to make the scarves for us. Special mention also of Malcolm Logan who facilitated their making. We gave over a £1000 to the charity from our sales and we thank God for everyone who contributed. 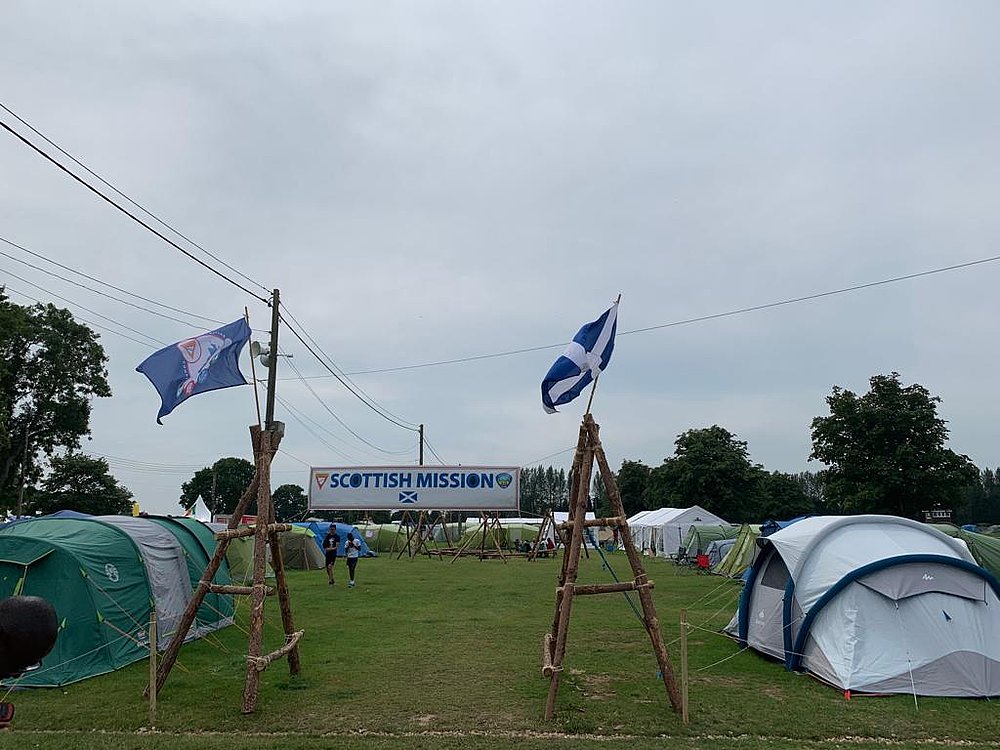 Behind the scene, the BUC, as hosts, had tasked the Scottish Mission with looking after the TED Field Support which included securing the toilets and shower provision as well as management of the entire Camporee site. This was the first time the Missions were tasked with such a huge responsibility. Pastor Njay took up this challenge, formed and led a team of volunteers from different entities including some from the Scottish Mission. Excellent team effort saw the Mission do an amazing job of field support and great strides and invaluable experience made in working at this level. 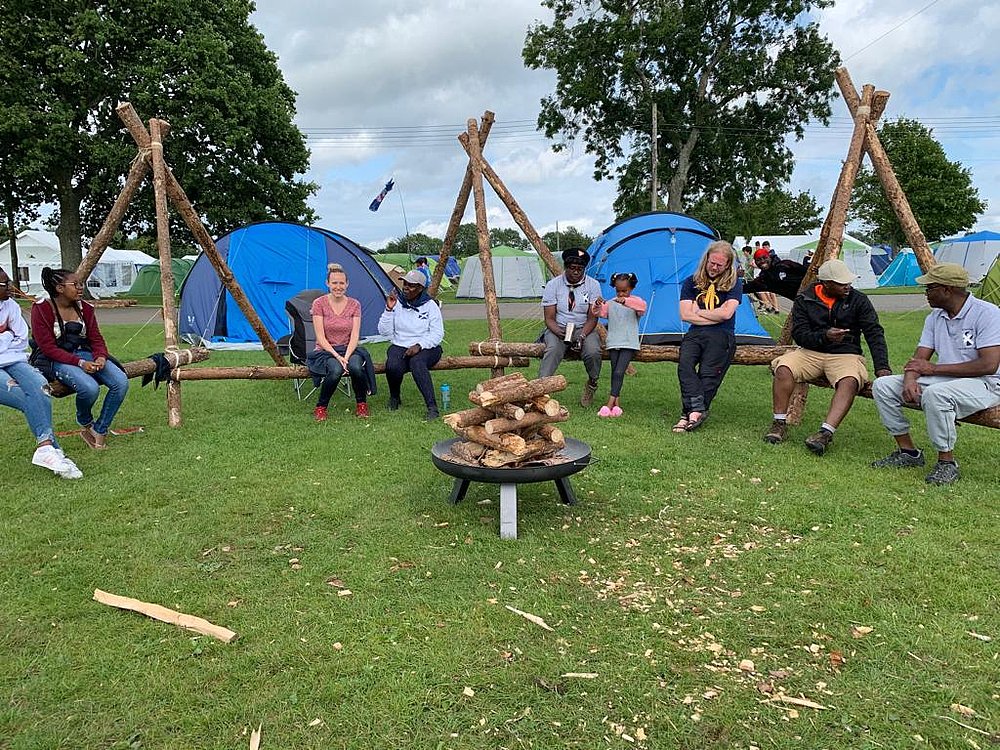 One common complaint among everyone was that it was over too soon, "time flies when you're having fun but it goes even faster when you're sleeping in a tent". As we count down the days to the next camp, we shall keep the infamous Scotland chants in our heads till next time.

We would like to thank Pastor Paul Thompkins, Pathfinder Leaders and assistants, parents, volunteers and the Pathfinders who made this Camporee possible.