Promotional information about the course in 'Handling Power in Leadership', states,

'The beatitudes picture the kingdom of God as a realm where normal human assumptions are turned upside down. Those who seem powerless are promised blessing. God invites us to stop seeing ourselves as victims and rejoice in the power of the Spirit.

'And yet churches, as much as any other part of society, get caught up in power struggles. Leaders can feel oppressed by dominant families, in-groups or individuals. Equally, ordinary members can be driven to despair by domineering leaders.

'It all gives power a bad name an unseemly thing for Christians even to talk about.

'But what if we see power as something that is simply a fact of life? What if no one is powerless, and everyone can choose how to use what power they have ‒ for good or for evil? This way of understanding power brings both liberty and responsibility. Especially for leaders, it means seeing power as a gift and using it wisely.' 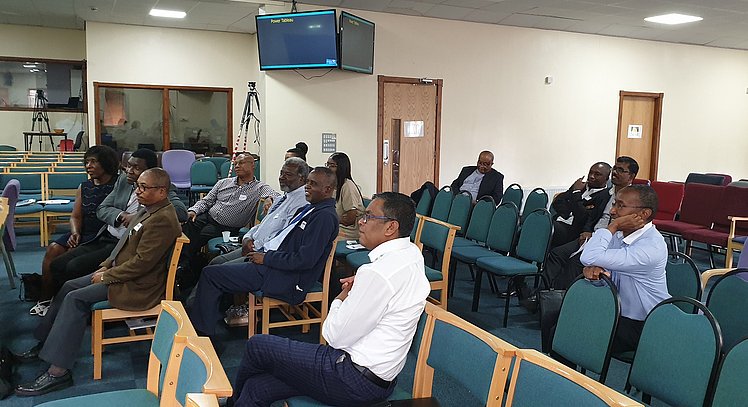 Ministry is a place where you see various power dynamics and power can be used well and badly. The seminar began with two definitions of power:

'The ability to get things done or to influence outcomes. The ability to affect and be affected by the feelings, attitudes, beliefs, opinions and behaviors of others,' and

'The ability to take one's place in whatever discourse is essential to action and the right to have one's part matter.'

The skills imparted through this seminar gave ministers an opportunity to look at themselves, and their approach to power. One of the key points that came out of the day's training was that power is not something that lies in an individual but that in truth it lies in relationships between people. We choose to give certain people and things power. It is not something innate.  Secondly power is neutral, it is neither good nor bad but can be used in various ways. It helped the pastors' identify any inadequacies that they possessed in their own thinking about power and how they use it.

This workshop led the pastoral team to consider the various types of power that often are incorporated in the work we do. Liz Griffiths led the team to explore, 'Experiential Power', 'Instrumental Power', 'Projected Power' and 'Spiritual Power'. We looked at how the various sources of power can impact on our work, our relationships and even our well-being if not correctly managed. The link between power and who is exercising it was brought out in the discussions. 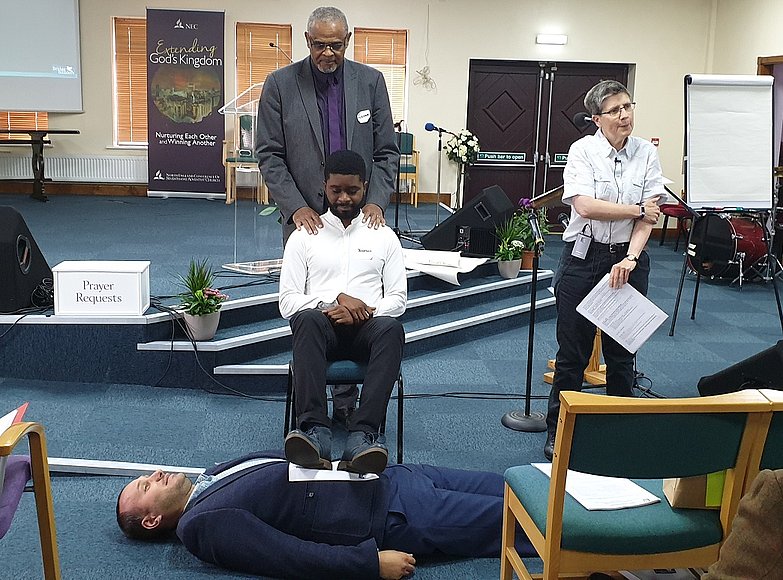 A powerful illustration was used to demonstrate how people experience powerlessness at various levels. Three volunteers, one lying on the floor, one sitting and placing his feet on the chest of the one lying down and one standing placing his shoulder on the hands of the one sitting. The image itself created some strong reactions among those participating in the exercise and those viewing. A lively discussion was started that considered, 'who has the power', and how they were displaying the power. What kind of impact and feelings does seeing this create in you and are there ways in which you relate to any or all of the positions the three participants had in your own life. As the discussion continued it moved on to, 'How does the different positions of the volunteers relate to power and conflict in ministry?'

One of the most fruitful aspects of the day was a discussion on powerlessness and the various levels of powerlessness that can be felt by people. The majority of the time people feel powerless rather than powerful and that may be because of the outcome of a situation, the process, social esteem, self-esteem and the deepest level of powerlessness existential issues.  In dealing with all of the causes of powerlessness we discovered that it is not necessarily about changing your circumstances but tending to your inner life. How you perceive the situation, recognising that you are not as powerless as you think.

Finally, the day ended with how we can empower others and that it is so important to model behaviours that empower others. The attendees discovered that how they speak to people is so important in whether they are empowering or not. Advising, judging, diagnosing, questioning and minimising however well-intentioned, can be extremely disempowering. The real secret to empowerment is presence, 'learning to devote attention to the other person and their perceptions, setting aside my ideas reactions and experiences.'

It was truly an inspiring day, where the pastors left feeling more secure in their power and more able to empower others for the growth of God's kingdom.