What a fantastic sight; driving down a country road towards the sea with the bright amber sun setting into the sea. This is the sight we saw as we arrived safely at Chapel Porth campsite Friday evening (20 September) as Sabbath drew in. Everyone was just beginning to tuck into the fantastic food prepared by Earl and Jackie Ramharacksingh.

Worship at Chill in a Field is quite different from other events. Sitting around in a cosy circle of sofas, beanbags and cushions surrounded by soft lighting and house plants brings a real sense of community and friendship. Christle Jasint flew in especially from Holland to lead out in the discussions over the weekend and challenged us to evaluate our lives. Our first exercise was to think about what we excel at, where we are going, what we dislike, what we are loyal to and how we can grow. We then spent time writing in our journals about our lives now to our 5 years older selves reflecting on the positives and the negatives.

Our theme for the weekend was based on the worship song 'I am who you say I am'! Each activity and discussion was designed to make us think of how God sees us and discourages the negative feelings we have about ourselves or have heard from others. 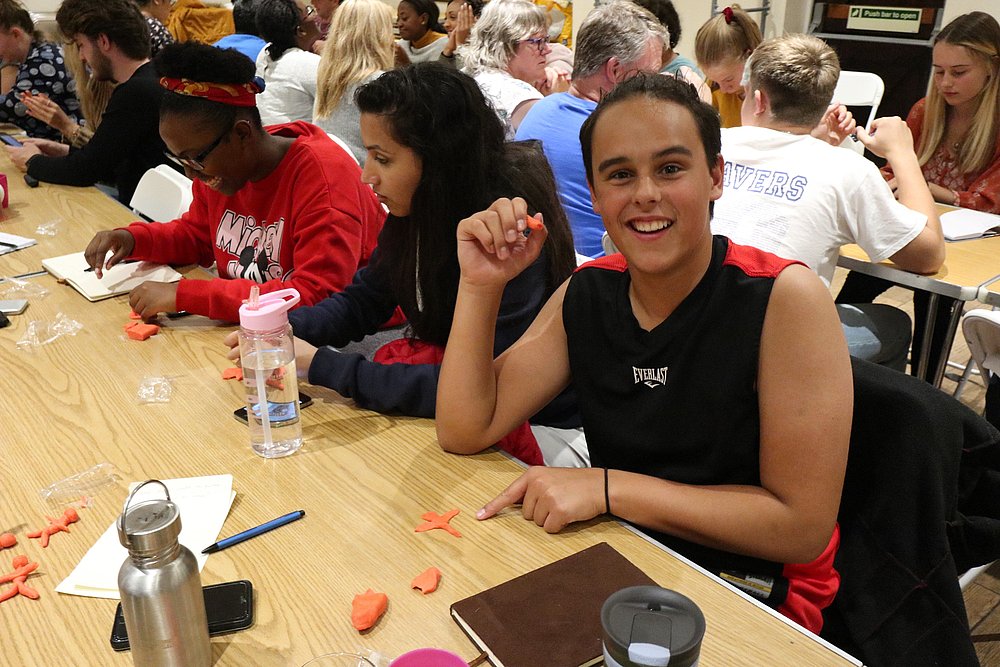 A new morning saw more people at worship as some had arrived late in the evening. Before every message we joined together in song. Accompanied by Steven Hulbert (event organiser and worship leader) on the guitar and Rosie on the cajon with powerful worship songs such as Cornerstone, King of my Heart and Days of Elijah. In a time of prayer everyone was asked to consider in a word what they hoped to gain from the weekend. I simply wrote Peace. After a hectic week, if only for a weekend, I needed to relax and reflect on who God says I am.

On Sabbath morning Christle guided us through the story of Joseph from childhood, slavery to prison. We dissected each section of Joseph's life and found there were a lot more negatives then positives but came to the conclusion that we see his strength of character in the negatives. Throughout his story Joseph stays true to who he is and recognises that he gets his strength from God. Joseph must have had seasons of doubt but overall his love and trust in God shined through.

Throughout the weekend Christle returned to the story of The Lion King. Mufasa takes young Simba up to Pride Rock where all can see him and shows him all the Pride lands and says, "everything the light touches is yours!" Simba is put on a pedestal and it all goes to his head and Mufasa has to come to his rescue and leads him out of harm's way.

After a fantastic lunch everyone gathered to hear the personal testimony of the two young baptismal candidates; Barney Jackson and Edward Hilburn. Barney shared that he was inspired by his older brother Jake's baptism and felt the final push at Big Church Day Out, a huge Christian camp of 25,000 people in May. He then realised how much God had been there through his life.

Edward mentioned how strong worship sessions had influenced his decision and moved him to be baptised and also shared how events in recent years have made him realise how much he needs God in his life.

Pastor Robert Vine, Edward's grandad, then shared a few words, stating that all life is a miracle and likened our stages of faith to big stages of life. First, we hatch in birth, then we are matched in marriage and then we are dispatched in death. In baptism we are reborn in Christ, we make a voluntary commitment to Him in 'marriage' and we believe that He died for all of us. He finished by stating that if we have Christ, we have nothing else to worry about. 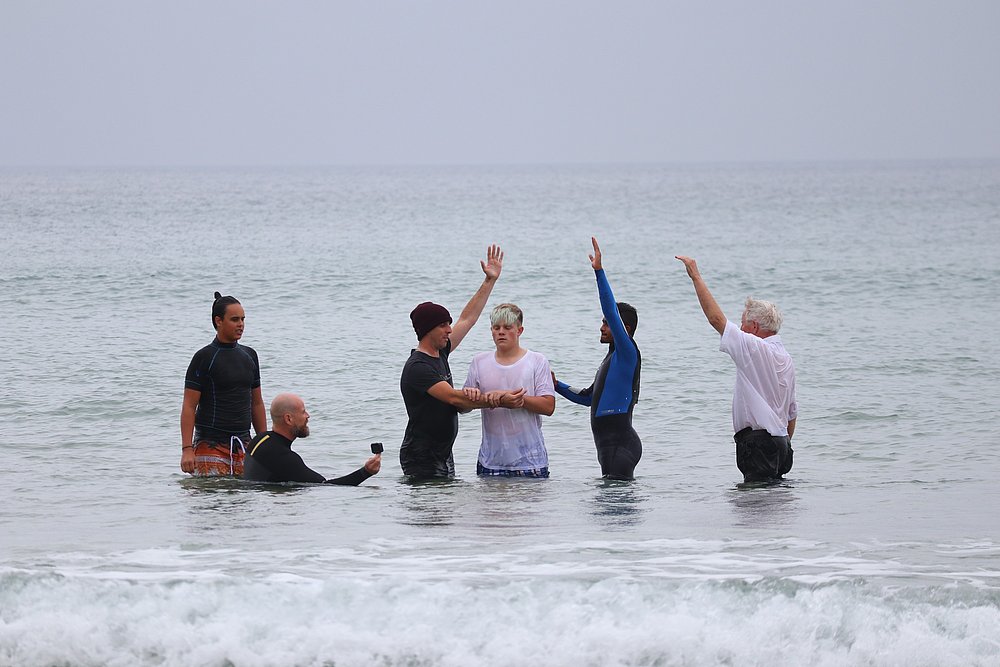 At Chapel Porth beach, friends and family gathered at the water's edge to see Barney and Edward being baptised in the sea. Edward was baptised by his grandad, Pastor Vine and Barney by Pastor Sam Gungaloo, both assisted by Steven Hulbert (Frontier Evangelist). Once everyone was warm and dry back at camp the service closed with song and prayer.

In the evening the comparison between Joseph and Simba continued. Before returning to Pride Rock Simba, like Joseph in prison, had to rely on his friends to remind him who he was and what he needed to do. Both would have remained in exile/prison had their friends not remembered them. We were challenged to think of what/who we need to get our place at 'Pride Rock'.

The evening's exercise challenged us to think about dreams we would want to pursue if money wasn't an issue, what we are willing to struggle for and in 5 years what would we be happy doing/being. We also had to get creative and represent our answers in play dough. For most this exercise was very thought-provoking and challenging.

Christian singer/songwriter Chloe Reynolds, joined us for the evening and shared music from her latest album which reflected the topic for the weekend. She mentioned that initially she didn't want to sing about her troubles but later realised that sharing 'down' times helps to build relationships with others who are struggling and highlights the resulting strength of character and trust in the Lord.

Out of these thoughts came 'Broken Beautiful' a popular and very touching song.  She later sent a quick message of thanks and commented, "I love the events that you guys put on. Real. Authentic... a chance for people to come together as community and do life together. Love it!"

Our final worship together on Sunday morning focused on 'The circle of life'. The rollercoaster of Joseph's life came around full circle and he ended up saving his family just like Simba in the Lion King. Regardless of the ups and downs both lives came good in the end thanks to the help of the community around them.  God is always there for us and encourages people into our lives at just the right time to help us through. 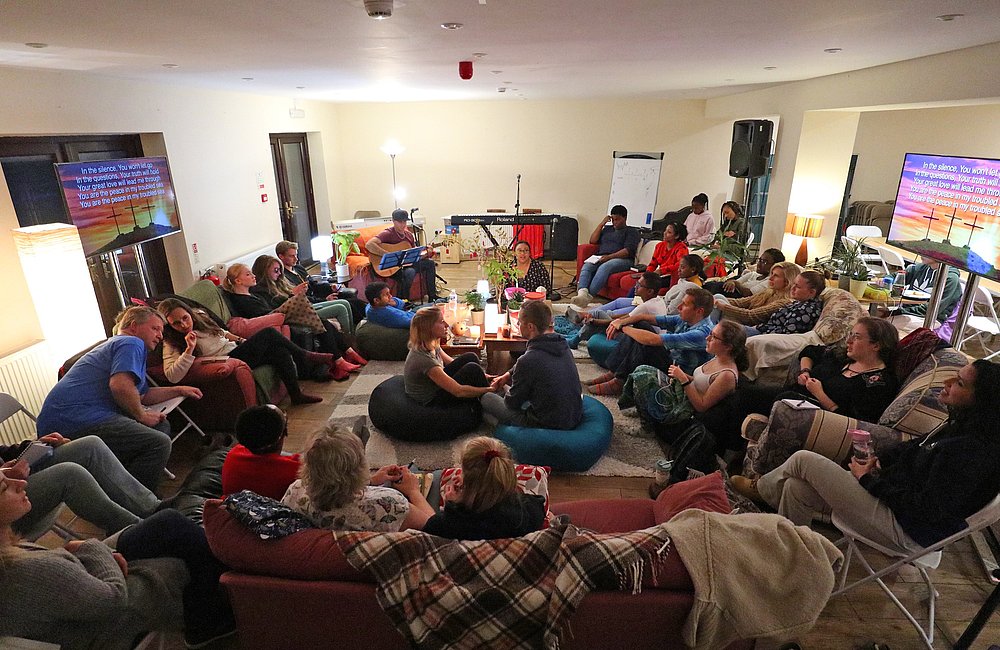 The weekend flew by far too quickly and before we knew it was time to head home. We learnt, through Christle's guidance, how important it is to know who we are and how God values us.