After months of preparation and promotion of the event, World Pathfinder Day had finally arrived. Early Sabbath morning of 21 September, most people travelled long distances to the Bonus Arena in Kingston-upon-Hull to celebrate this worldwide event set aside by the General Conference. The theme was 'Created with purpose'. There was a lot of excitement and anticipation with most arriving around 8:00 am in time for the registration scheduled for 8:30 am. It was a joy to once again see Pathfinders gathered together in numbers in this fashion like they did just the month before (August) for the TED and Oshkosh Camporees.

After club directors registered their clubs and wristbands were given out, it was time for the 3500 Pathfinders from across the British Union Conference (BUC) to enter the arena. The BUC Praise Team led by Joshua Elliot got right into a lively song service. They took the audience back to the TED Camporee by singing the 'Exodus' song written by Elijah Evans. 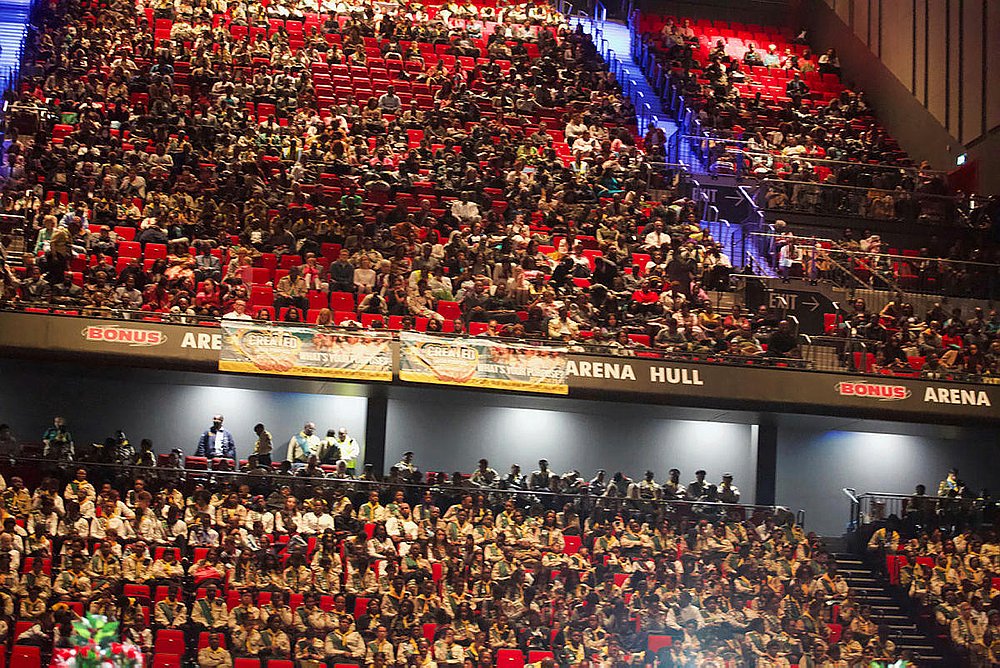 Pastor Ikwisa Mwasumbi, the North England Conference (NEC) Pathfinder director declared the World Pathfinder Day open and introduced to the stage Pastor Richard Jackson, NEC President. When he spoke, he thanked the women from across the Conferences for working tirelessly by supporting their Pathfinder clubs. He encouraged the men to also support their clubs as there are not a lot of men doing so. He also talked about the NEC having discussions with the relevant people to get the Pathfinders in Areas 4, 5, 6 and 7 involved in the 2022 Commonwealth Games in Birmingham. This will be a great opportunity for the Pathfinders to minister as they help with the Games. Before he left the stage, he inspired the Pathfinders with Philippians 4:13 to remind Pathfinders that they can do all things through Christ who is their strength.

The divine worship speaker, Roger Wade, Director of Church Ministries at the Mid-America Union, resident in Lincoln, Nebraska, was introduced on stage by Pastor Mwasumbi, before a special item from the World Pathfinder Day choir, who mostly were from Newcastle. The sermon was entitled 'You ain't my daddy and this ain't my home'. He based his message from the parable trilogy in Luke 15:1-32 ‒ the parable of the lost sheep, the parable of the lost coin and the parable of the lost son. The message of these three is the same ‒ Jesus associates with sinners and they are important to Him. God desires to find sinners and bring them back into the fold. Just like with the lost sheep, coin and son there is great celebration when they are found. They are important to the owner. Pathfinders are important to their Owner and Creator because they are created with purpose.

Over lunch, most clubs headed outside into the sun, and prepared for a change of scene. A guest, Pastor Mo Timbo from the 'Potters House' church in Hull, known for his campaign in standing against knife crime led the 3500 Pathfinders and Adventurers through the streets of Hull. Local police joined the crowds in support and to provide a symbolic role of their protection. It has been reported that there have been almost six hundred serious offences involving knives in the Humberside Police area in the last 12 months to March. 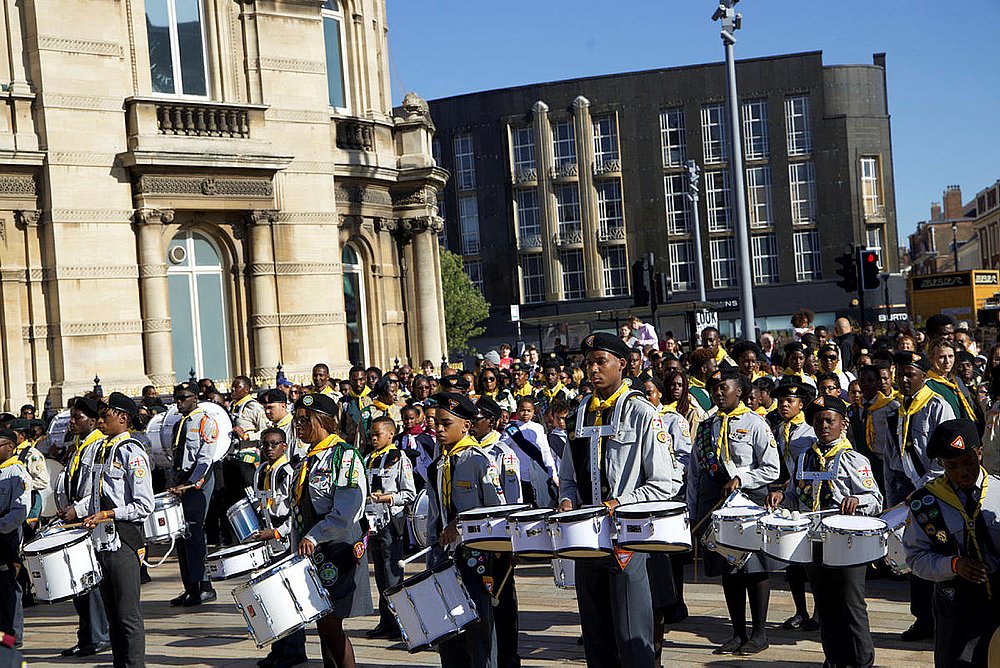 As the drum corps signalled the start of the march Pastors Timbo, Jackson and Mwasumbi were interviewed for a short news item which was broadcast on ITV news in Yorkshire. Pastor Timbo leads the #NoMoreKnives team as they tour the schools of Hull, East Yorkshire and North Lincolnshire, alongside the Humberside Police teaching children about the dangers and consequences of carrying knives.

The march took the children to a large central square led by the two-drum corps where very short speeches were given. There were Pathfinders and Adventurers as far as the eye could see. On the large monument base young men and women from Hull mingled freely with Seventh-day Adventists in and out of uniform.

As the crowd returned to the arena passers-by were given books and commented on the positive impact that had taken place in the city. To close the day's events, twelve Master Guides were invested whilst individuals and singing groups used their talents to praise the Lord through singing and playing musical instruments.

Pastor Mwasumbi then declared World Pathfinder Day closed. It was another blessed day with Pathfinders learning that they are special in God's eyes and that they were created with purpose.

A selection of pictures of the day can be seen here