Asked what inspired them as a family to support their chosen charity, Girlie-May stated "We supported Kidney Research UK in memory of Commander Vicente Bencito, whom we fondly called Itay (Filipino word for father). Itay suffered from kidney failure and underwent 7 years of dialysis until 14 September 2018 when he lost his battle with the disease.  His resilience and his determination to get better has inspired us to better our health.  Throughout his life, Itay has lived, loved and served.  His unwavering faith in God has propelled us to be better Christians."

For Rowena her decision to run was also personal because her daughter has type 1 diabetes. She wanted to advocate awareness of the differences between type 1 and type 2 diabetes.

Five of them are hoping to participate in the marathon again by celebrating its 40th year in 2020 with more family and friends joining in.

Though they found the marathon challenging, it was also fulfilling because they focused more on the reasons why they were doing it. Girlie-May found Hebrews 12:11 encouraging which says, "No discipline seems pleasant at the time, but painful.  Later on, however, it produces a harvest of righteousness and peace for those who have been trained by it."

The Great North Run is the largest half marathon in the world, taking place annually in the North East of England every September. Participants run between Newcastle upon Tyne and South Shields. The run was devised by former Olympic 10,000 metre bronze medalist and BBC Sport commentator Brendan Foster.

The first Great North Run was staged on 28 June 1981, when 12,000 runners participated. By 2011, the number of participants had risen to 54,000. For the first year it was advertised as a local fun run; nearly forty years on it has become one of the biggest running events in the world and the biggest in the UK. Only the Great Manchester Run and London Marathon come close to attracting similar numbers of athletes each year. Organisers have said that about 57,000 runners registered for the 2019 13.1 mile event. 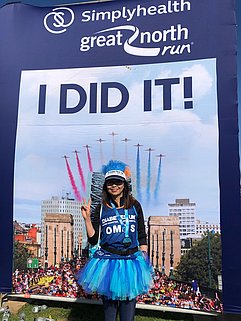