Fletewood School, an Adventist Primary School in Devon, celebrated their 100-year anniversary this past weekend. Together with Plymouth Adventist church they opened their doors Friday through to Sunday (13-15 September) to welcome alumni past and present; teachers, administrators and students who had been part of the school over the last century.

From simple beginnings in a rented room the school has flourished through the decades and withstood the tests of time, closing only shortly for World War II. Mrs Joyce Hill (former teacher) stated in a document entitled 'A History of the Church School in Plymouth, Devon' that "one factor has remained constant ‒ that factor has been the desire of the Plymouth church to give its youth a Christian education."

In July 1919 with no school building or teachers the parents stepped out in faith and informed the state schools that their children would not be returning in September. On Monday 15 September 1919, Miss Middleton began to teach 18 Adventist pupils in a rented conference hall with makeshift desks, no books and no blackboards. However, by the end of term the school had moved to 19 Greenbank Avenue and was much better equipped.

In 1929 Plymouth church and school moved to Fletewood House where it is today. The building survived World War II undamaged and in 1949 the school reopened with only 9 students but within 3 years there were 53 students enrolled with a long waiting list for future students. A poignant reminder that if something is of God it will flourish!

Friday night saw everyone meeting in the church for vespers. Pastor Clifford Herman led the evening programme and began with a quick 'getting to know you' session. Throughout the programme Mrs Rachel Gray, current headteacher of Fletewood School and Mrs Ann Martin, former nursery (class 1) teacher for 34 years led out with classic assembly songs such as 'Everybody Ought to Know', 'I've Got the Joy, Joy, Joy, Joy' and 'The Grumbling Song'. These were classic Fletewood School songs introduced by Mr and Mrs Martin in 1982 and well loved by pupils past and present. 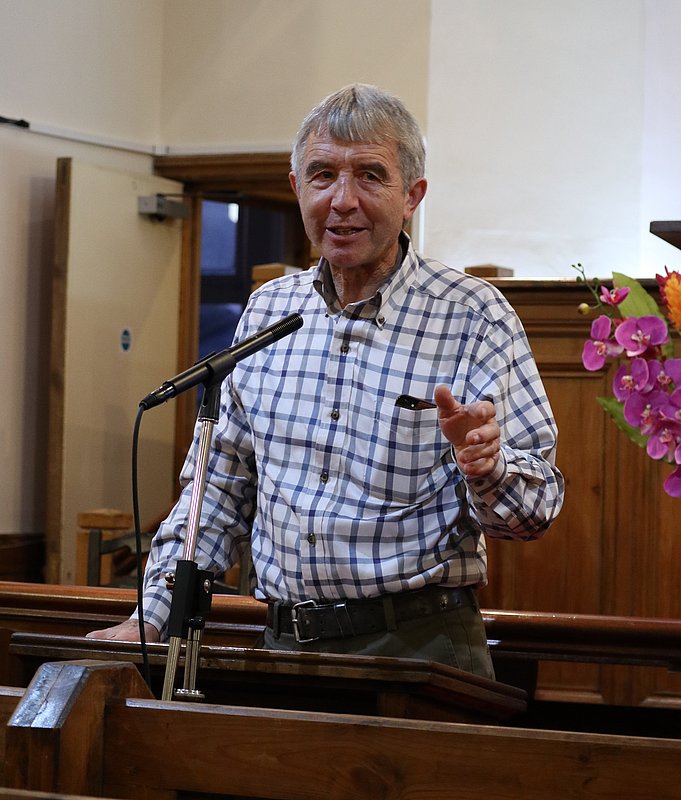 Past pupils took to the microphone to share their experiences of the school. First Meghan Herman (2013-18), then Jennie Hall (1994-2000), Rachel Gray (1989 formerly Martin) and finally Norman Bunker (1956-61). Mr Bunker and his sister, Linda, both now living in North America timed their visit to the UK especially to attend the centenary celebration and joined in the whole weekend. Mr Bunker commented on how a good Christian education keeps a person in good stead and remembers how his teacher, Mr Norman Wright used to go through the Exodus story every year with the class.

Mr John Martin, former head teacher from 1982 until 2016, commented that "meeting so many past pupils and parents and catching up on life stories and successes" was one of the highlights of the weekend for him. It was also good to hear news such as one former pupil who joined the fencing club when she attended Fletewood and would now be competing in the Olympics in Japan next year fencing for Jamaica.

Everyone was thrilled when Pastor Herman presented a video of Mrs Joan Frost, one of the first students at the school who attended in 1929. Now aged 95 she was unable to travel but shared some of her memories of life in the school. She commented that as she had grown up watching the naval personnel walking to church every Sunday morning in their uniform, she was excited to also wear a uniform of her own. She even remembered the small playground at the back of the school and that they had to walk to Central Park every Wednesday for PE like the students still do today.

Mrs Gina Abbequaye (BUC Education director) closed the evening programme with thoughts from Ecclesiastes 3:1-8 and shared the story of the teacher with a jar. First, he puts in stones and asks the class if it's full, they say yes, but he continues to put in pebbles, sand and water until the glass is actually full. She commented that a good Christian education is the initial stones, creating a sound foundation and relationship with God. If we try to put pebbles (i.e. finances) or sand (i.e. things we want) in first there is no space for God. An important lesson we all must remember throughout life.

On Sabbath morning the church was full as everyone joined in 'Praise Ye the Lord, Hallelujah' before Pastor Herman led everyone in a quiz covering the history of the school. He then went on to explain the history of the Adventist Church which led to the need for Adventist schools. Also, in the morning's programme Mrs Gray shared a report on the school past and present and saxophonist Daniel Costin performed.

Mr Earl Ramharacksingh (BUC Treasurer and long-standing friend and trustee of Fletewood School) shared a message about Daniel and his captivity in Babylon, which was home to the first educational institute in the Bible. He highlighted how important his friends were and how they stuck together as well as sticking to their beliefs. Together they were a solid support structure. Therefore, it doesn't matter where you find yourself as long as you surround yourself with people who see your worth and share the same values as you. Before the close of the service Pastor Herman did a dedicatory prayer for the current staff members. After the service everyone gathered in the school playground for a street party style picnic. 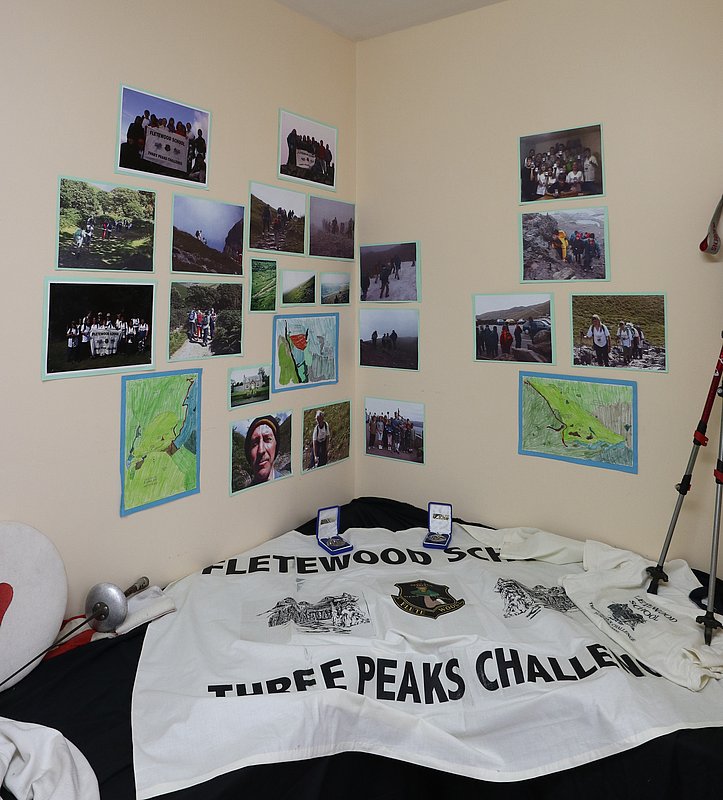 Sunday saw the school open from 1:00 pm till 4:00 pm with presentations throughout the building showing the school through the ages. All the past pupils and parents had a great time reliving their childhood years, spotting themselves in photographs dug out from the archives. Mr Martin skilfully revived old computers to working order from 30+ years ago. Many other relics from the past were on display including old registration books noting that the students were sent home due to tiredness from the night's air raids. 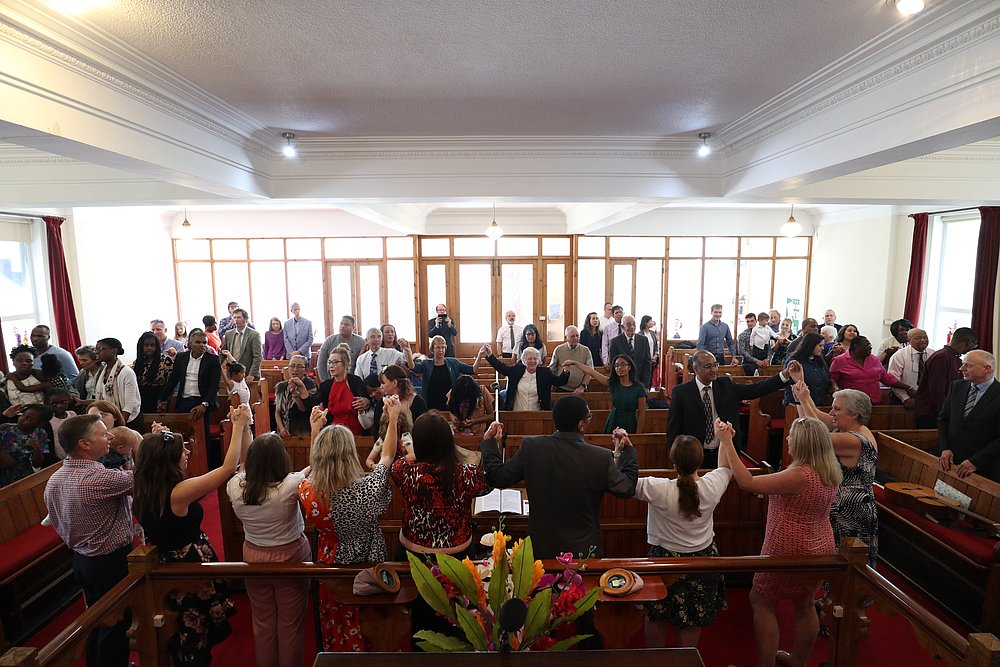 Of course, after each day's events no one could go home without first singing the school theme song, 'Side by Side', and joining hands together. Mr Martin commented that whilst "reliving the memories of the last 37 years I realised just how much fun it had been teaching at Fletewood. It was more like playing rather than working, trying to develop more and more elaborate scenarios and games to encourage the children to learn whilst enjoying being at school."

As a church and school community we would like to thank the past and present teachers and staff of the school for their continued hard work and dedication to the discovery of excellence in every child. We hope and pray that the school continues to flourish for many years to come and that God's guidance will continue to be felt within the school.