Held every four years, the SEC Session is the forum where the business of the Church is discussed at Conference level and includes a variety of important agenda items including the election of administration and departmental officers, the SEC executive committee, that steers the business of the Conference throughout the quadrennium and steering committees such as the plans committee. It's also a time to review the constitution examining any proposed amendments that are brought to the floor. Delegates get the opportunity to question and comment on administration and departmental reports, bring forth motions, amendments and proposals and ultimately to vote on items and recommendations that have been discussed. This four-day session proved to contain all the above as delegates arrived having ploughed through pages of reports and documents in preparation for their task.

The Guildhall, Portsmouth University, was the venue for this 63rd South England Conference (SEC) Session. Held from 5-8 September 2019, 543 delegates (401 Regular and 142 Delegates at Large) representing over 200 churches across the SEC, assembled together for this meeting.

Recognising the importance of every vote and the lasting impact it will have on the way the Church functions, underpinning all the business sessions of each day was prayer. Aided by the SEC Prayer Ministries team, the session opened with a united time of spiritual reflection and to ask for God's leading in all matters that would be dealt with. With a call to confession, repentance and reconciliation, SEC Bible worker, Linda Mukwanda reminded the delegation that God is the real Divine Director who guides His church.

With this precedence set in the opening meeting on Thursday afternoon, each delegate was formally welcomed by Pastors Emmanuel Osei (President) and Douglas McCormac (Executive Secretary) and having obtained a quorum, the session was declared open.

With the minutes accepted from the previous session, the first items on the agenda saw the acceptance of several newly formed churches into the sisterhood of the SEC. The next task was the formation of the recommendations committee. This large committee which was partially completed prior to the session was finalised and tasked with the responsibility of formulating the nominating, plans and licenses and credentials committees.

With these formalities undertaken the first main item for discussion was the acceptance of the proposed departmental structure that would determine the allocated budgets and directors who would fill those positions. This proposal saw some changes to the present structure, namely the Health and Community Services departments to be led by one director under one full-time budget. The other was a restructuring of the youth entities to contain Children's, Teens, Pathfinder and Youth director, that would be overseen by a supervising Youth and Children's director. This proposal saw much discussion as some delegates aired their concerns of seeing this as another level of bureaucracy whilst others welcomed the attempt towards cohesion in bringing uniformity. However, coupled with the concerns over uniting Health and Community Services, together with a passionate plea from one delegate that was embraced by others to include in the structure a role for PARL (Public Affairs and Religious Liberty) the delegation voted on an amendment to the motion to separate the Health and Community Services departments into stand-alone departments. In addition, it was voted to remove the position of the Youth and Children's coordinating director and with the full-time budget created from this removal, reassign half a budget to PARL and the other half to Personal Ministries which was being presented at a half budget. With this lively debate which ended with the amendment accepted by the delegation, the first afternoon session ended.

The evening session on the first day is traditionally reserved for the president's report. Pastor Osei gave an overview of the events that have occurred during the past quadrennium through a video presentation. Looking back Osei highlighted the evangelistic vision that was established with previous Conference President, Pastor Richard de Lisser, 'Evangelism; Everyone, Everywhere'. Osei taking this theme spoke of the annual themes that underpinned the strategy namely, Revival, Restoration, Reclamation and Retention.

His presentation included highlights of the main accomplishments within each Conference department and various evangelistic and outreach activities that were held within the various areas around the Conference from Area 1-8.

Reference was made to the ongoing developments with the North Runcton site which when completed will provide accommodation and a camping site for Pathfinders and Adventurers. The long-term vision for the site would also involve the purchase of further land to provide a venue for evangelism and departmental training for all church members which would avoid having to hire hotel venues. An update was also provided on the refurbishments at Chapel Porth which would see new chalets replacing the aging caravans.

On Friday the business session commenced with the acceptance of the recommendations committee report for names assigned to the nominating committee. This committee would be responsible for choosing names to fill all administrational, i.e. President, Executive Secretary and Treasurer and departmental roles. They are also assigned with choosing the executive committee that would sit during the next four years dealing with Conference related matters and ensuring the vision and mission of the Conference is established.

The morning session also received a report from the Executive Secretary, Pastor Douglas McCormac. His report highlighted that during the past four years as of 31 December 2018, the membership of the Conference stood at 25,295, an increase of 1,986 over the four years from 2015, which equates to almost 8% growth over the period. This church growth was a result of 1,892 baptisms and 277 professions of faith. McCormac's report also showed that as the Conference continues to grow, there is also the movement of those who are leaving our congregations and the statistics reveal that on average we currently have a retention rate of 62%.

The treasurer's report followed given by Fred Shone. His report highlighted that during the past four years there has been steady growth in tithes demonstrating the faithfulness of our members. The total for the quadrennium was £59.3m, more than 15% up on the previous four years. With the introduction of SEC Text Giving for local churches, and an upcoming app for returning tithes, total amount including offerings are expected to increase.

Both administrational reports after a period of questions from the floor, were accepted by the delegation.

Whilst discussions were taking place in the main auditorium, the nominating committee had been meeting to appoint names for the three administrative roles. Their report was presented to the delegation with the recommendation for the re-election of President, Pastor Emmanuel Osei and Executive Secretary, Pastor Douglas McCormac. Both names were seconded and approved with applause by delegates. For the role of treasurer, a new name was presented. 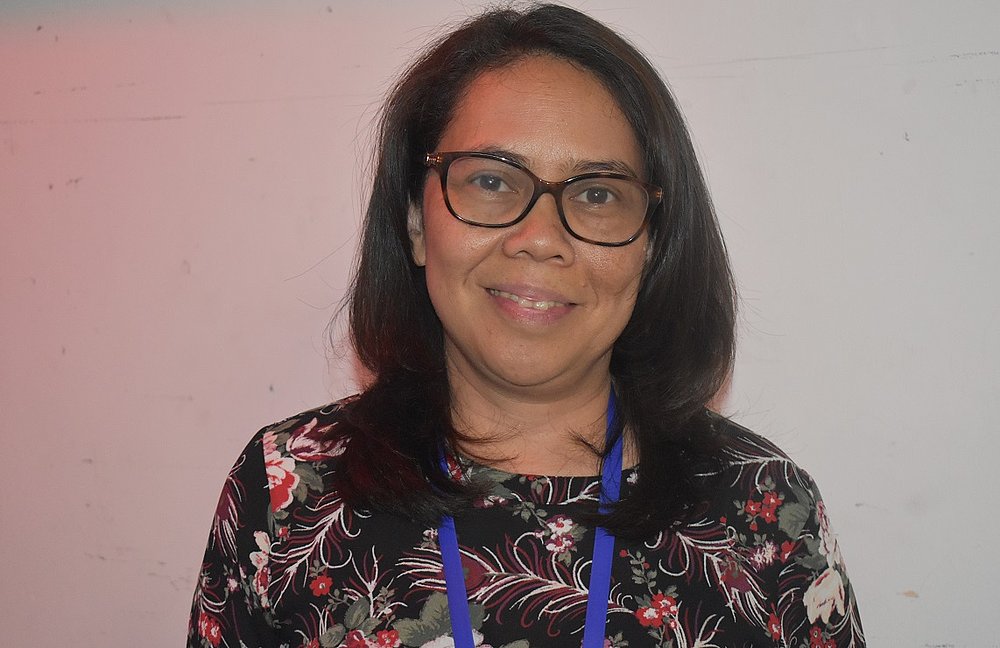 Candy Layson, who was serving as associate treasurer for the SEC. With her acceptance by the delegation, this marked for the first time a female elected to become a part of the administration. British Union Conference (BUC) President Pastor Ian Sweeney who was chair of the nominating committee gave tribute to outgoing Treasurer Fred Shone for his distinguished work, fortitude and humility for the unfaltering work he had done. In response the delegates applauded his service and servitude.

With these items finalised, the second business day ended in preparation for the Sabbath.

Throughout the session, morning devotions had been led by guest speaker Pastor Royston Philbert, 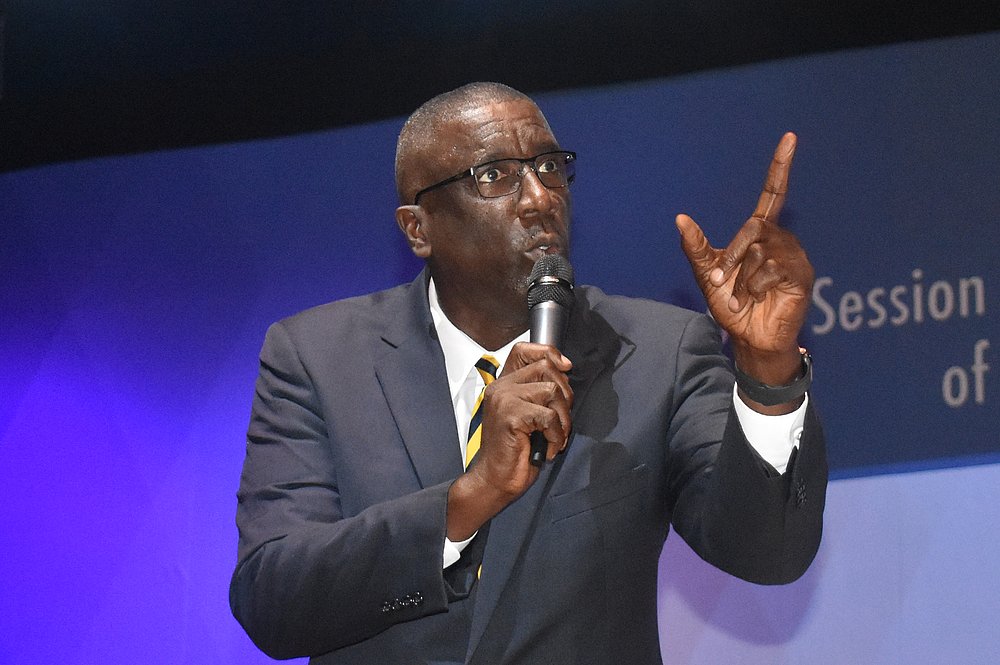 Ministerial and Communication director from the North Caribbean Conference.  His energetic and engaging style of preaching with pertinent messages around the theme of 'Christ-like living', provided a constant reminder of the responsibilities of reflecting Christ to a questioning world. His Sabbath morning sermon centred around the statement that when people question you about your faith answer them by your lifestyle.

After Sabbath vespers, the work of church business reconvened. Reports were given by the Sabbath School and Personal Ministries department by Pastor Michael Mbui and the final day on Sunday morning, further departmental reports were presented. During these presentations, delegates have the opportunity to ask questions based on the reports submitted. 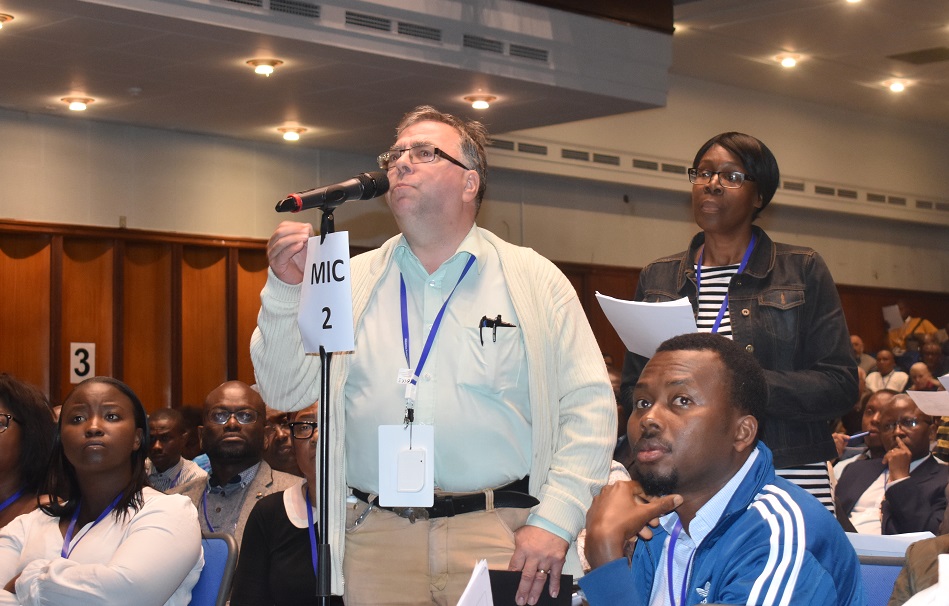 Reports that generated most discussion included Family Ministries where questions were posed on areas of singles ministry and a clarification on the vision of the department, to which Pastor Augustus Lawrence was able to outline a clear plan for the department. Questions on Education centred around Adventist schools, the relationship between the SEC and Stanborough School and the challenges in legislation governing sexuality education in schools. With questions on Youth and Teens, as with most departments, statements from the floor expressed commendation towards the work done, with a call for further stability and training in leadership to prepare and equip leaders for more effective results. In Communication and Media, the delegation noted the increase in relaying information across the Conference and some delegates made suggestions to explore the effectiveness of social media, apps, webinars and the utilisation of members' media skills around the Conference.

The plans committee gave their report based on seven key proposals in which the executive committee and departmental leaders will use as a working frame to govern their missional activities for the next quadrennium. These points were accepted by the delegation subject to a few amendments and will be made available once the executive committee meet.

The licenses and credentials committee review all the various ministerial and church workers' credentials. These names are usually accepted as given, together with lay preachers' credentials which are decided at the local church board level and all approved by the delegation.

Other debates during the session centred around the proposed amendments to the SEC constitution, which after much discussion, was sent back by the delegation for further examination.

In addition to the administration of the Conference the nominating committee returned to the delegation to present the directors for the Conference departments. The following names were presented and accepted by the floor:-

Other departments such as PARL, Prayer coordinator, Property Development manager, will be decided at the first SEC executive committee meeting to be held later in the month.

As the session drew near to a close, Pastor Osei gave a final presidential charge highlighting his vision for the next four years. Drawing on John 21:6 with Christ's command to His disciples to cast their nets on the right side of the boat resulting in the capture of numerous fish, Osei encouraged the delegation to keep trying new and different methods of evangelism. With total community engagement, the focus is for all members to be involved in some form of community ministry to create a new church culture of inclusion and collaboration. His four-point charge included: 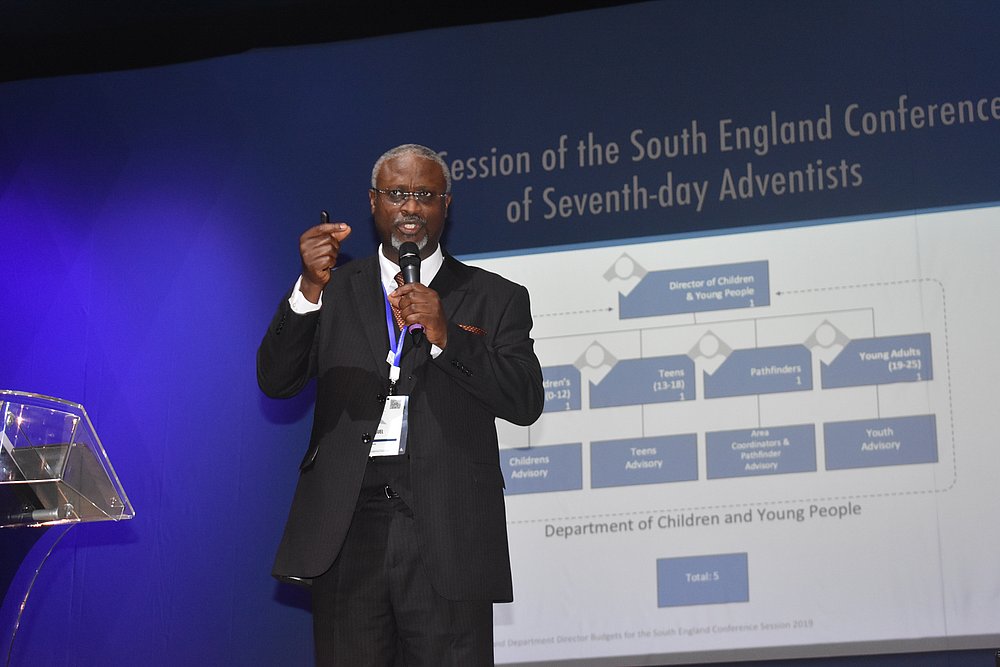 The assurance was that exciting days lay ahead, however there is a great work to be done, but we will be successful, "not by might, nor by power, but through My Spirit, saith the Lord."