Saturday 31st August, saw a great celebration in Bristol Central church, as it was officially inaugurated as a Centre of Health, Hope and Healing. 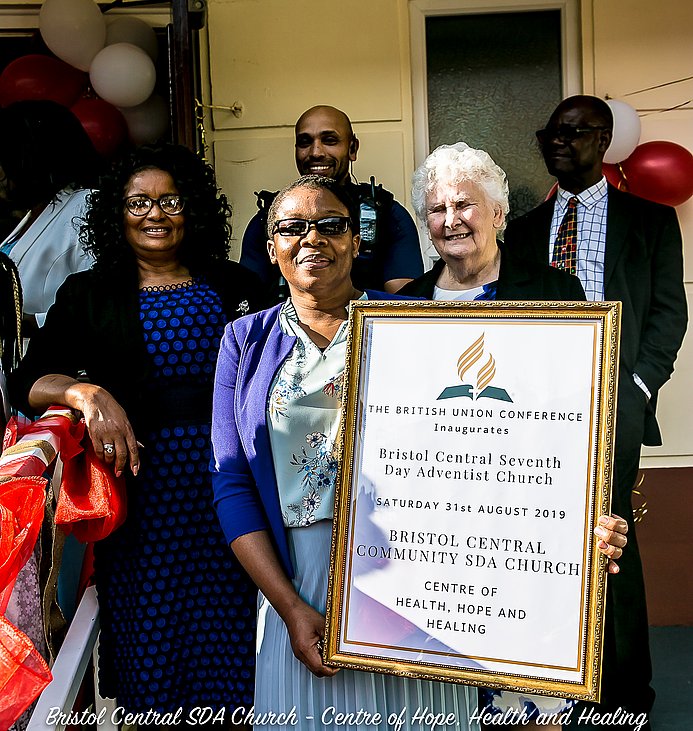 For the past five years, the church has increased its involvement in the community, through a variety of health and community events and programmes, and this has now been recognised by the British Union Conference.  BUC Director for Community, Health and Women’s Ministries, Sharon Platt-McDonald granted the status on the church, on behalf of the conference.  Centres of Health, Hope and Healing are an initiative of the BUC Health Ministries Department together with the Adventist Community Services department, and recognise churches which have a clear commitment to promoting Health and maintaining wellbeing, providing Hope through spiritual and emotional wellness, and Healing through restoration and support, in their local communities. 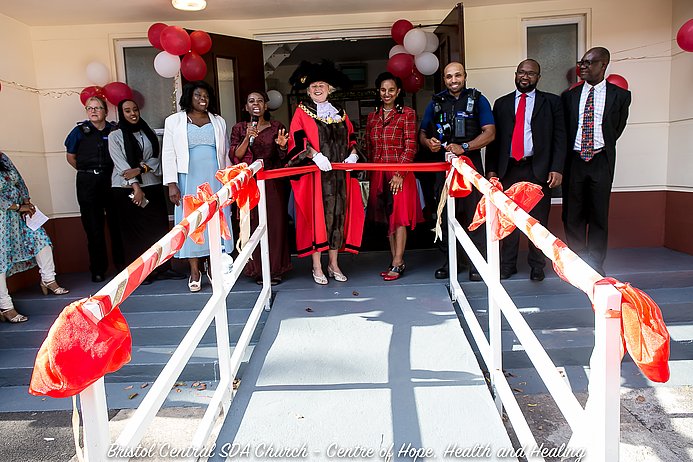 The Inauguration Service took place in the afternoon, and started with the welcome of the Lord Mayor of Bristol, Councillor Jos Clarke.  The Lord Mayor was invited to make a speech and officiated over the cutting of the ribbon. The Centre was officially declared open by Sharon Platt-McDonald to shouts of Amen from the congregation.  The Bristol Pathfinders Drum Corps then demonstrated their skills, to many cheers and the keen interest of passers-by.  It was a great atmosphere.

Sharon Platt-McDonald then gave a presentation, outlining the principles of a CHHH, and commending the church for its vision, commitment and breadth of its services to the community.  The Director had also brought a selection of complimentary resources as a gift to the church along with a cheque for £1,000, as a practical way to demonstrate that BUC Health and Community Services department both supports and rewards churches in their in-reach and outreach programmes.  The Director outlined how the CHHH programme had been developed and was designed to meet the growing needs of our communities and society.  Stressing the need to address local needs for our city, she gave some statistics on the health factors facing the Bristol area, challenging the church to continue its good work on addressing these issues.

Noted for a special commendation, was Mary Philip, Bristol Central’s Community Ministries Leader, who was instrumental in not only organising the day, but also the majority of the events over the past five years.  Mary has brought dedication, dynamic enthusiasm, organisational skills, and passion to the role, which she loves.  As the main powerhouse and driving force behind many of the health and community initiatives, since the first main event in 2014, Mary had built up a range of contacts and partnerships with various organisations, making many friends along the way.  It has also led to Mary receiving training and being recognised as a local Mental Health Champion, Health Champion with Public Health England, and being invited to sit on several committees.  It was acknowledged that without Mary’s involvement and vision, many of the events and partnerships may not have materialised, but Mary gave God all the glory, as He had opened many doors and opportunities and blessed the work.

To illustrate the breadth and range of Bristol’s community outreach, a selection of photos was shown in a PowerPoint slideshow of over 30 different events and programmes, from the past few years.  These included highlights of the many partnerships and collaborations that had been held with local organisations.  In fact, there was an audible sound of surprise in the congregation, when a list of 27 different organisations, groups and companies that the church had worked with and partnered with were displayed.  These included organisations as varied as Bristol City Council, Avon and Somerset Police, Avon and Somerset Fire Service, Diabetes UK, Glenfrome Primary School, Alzheimer’s Society, the University of the west of England, Bristol University, Rethink Mental Illness, NHS Blood and Transplant and many more.  Many of these events and programmes, as Bristol District Pastor Royston Smith noted, were made possible due to the ongoing support and encouragement of the South England Conference, who through the Bristol Joint Evangelism Committee, had supported and financed many of these initiatives over the past few years. 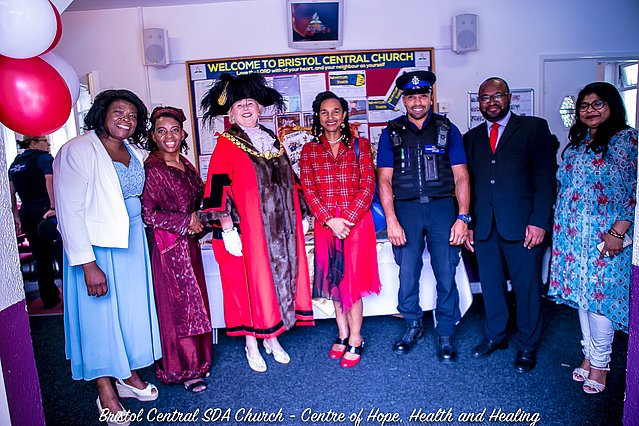 The Lord Mayor, who had already attended the Life Colours event in June, complimented the church on its caring for the city and the community, emphasising how important it was to help people in society.  She particularly commended the partnership working with the local councillor and other partners and agencies.  She described the occasion as joyous, and found it a great pleasure to be part of.

Local Councillor Dr Carole Johnson has been a major supporter of a number of the church’s events and programmes, for a number of years.  A committed Christian, she related how when she first met with Mary in a council meeting with other council leaders, she suggested praying before the meeting, which was met with shock and surprise.  Quoting Jesus from Matthew 7, she emphasised the church’s responsibility to produce “good fruit”, in terms of authenticity, integrity, and standards.  She informed the church that she changed her lifestyle, when she attended the very first Life Colours event at Bristol City Council. Life Colours is a Dr Chidi Ngwaba programme. It is a successful annual health event organised by the Community Department of the Bristol Central Church and has been running for the past three years.

Taking the Bible theme of those that work together in unity, command a blessing, Dr Johnson highlighted the way in which the church had reached out in many different ways, as a light in the darkness, showing people how to live healthier, better, and offering a new way.  She also commended the church for its practical caring, stating that although we are all a “strange and peculiar people”, “You have a great name in the community”, and by working together, “we can take the city” for God.  She ended by quoting Jesus in Matthew 25:35-40, where he commends those that cared for the “least of the community”, such as the sick, hungry, naked and in prison, as doing it to the Lord.

A particular inspiring testimonial was given by Consultant Neuropsychiatrist Dr Monica Mohan, a colleague who has known and worked with Mary Philip for 10 years on the Rosa Burden Centre for Neuropsychiatry at Bristol Southmead Hospital.  She explained how getting to know what Mary was doing as an active Christian, had led to her department getting involved, firstly with the ADRA Shoebox Appeal for three consecutive years, and then by supporting the community meal for the homeless.  She went on to explain that although she came from a Hindu background, she felt that she was on a journey to know more about the Christian faith, and it had been helped by knowing people like Mary and other Christians. This was met with much rejoicing in the congregation, and Sharon Platt-McDonald was invited to pray a dedicatory prayer for her.

As someone who had got to know the community really well, Police Community Support Officer Jacqueline Harper, also expressed her pleasure in supporting the day, as she had been working with Mary Philip from the first major event in the local area in 2014, as she helped organise the route which the Pathfinders marched down to the venue.  Having also attended the morning service and stayed over lunch, the church erupted with delight, as she greeted the church with “Happy Sabbath”.  She explained her admiration for the church and the way it was helping real problems in the community, especially the joy she felt as she saw young people in a positive environment, and she would welcome the opportunity to work with the church on a project to help families with young people who were not so fortunate, on issues such as wellness and mental health. 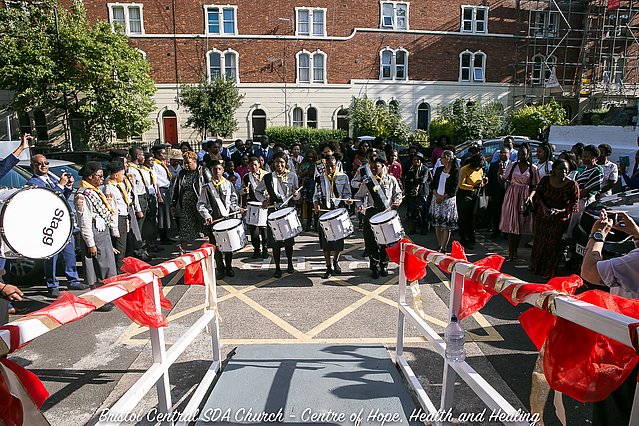 There were a number of other presentations including reports from South Bristol church and its community based outreach in Care Homes and musical witnessing programme in Southmead Hospital, and from Bristol Central’s Children’s department, who had started providing breakfast for community children on Sabbaths, and inviting them to stay for Creative Church, as well as running the Holiday Bible School, which is always in great demand from community children and their parents.

Pastor Smith captured the essence of the day in his opening remarks, as he described the ethos of the church, using a Jamaican proverb, “Every mikkle mek a mukkle”, which he translated as “Every little bit that you do, makes much”.  In other words, in every little thing you do, do it so others can be blessed.  This has been demonstrated by the contributions both big and small of many members, partners and supporters, in reaching Bristol and seeking to make it a better place.